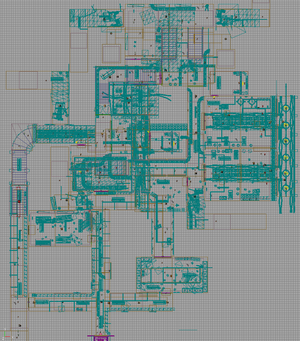 Map of the floor

The Horzine's Biotics Lab within London has incubators for growing additional zombie clones that are still operational. After entering the deep facility by the now-broken elevator, you need to destroy the zombie infestation.

Although there is no in-game overhead map, your team starts at the southern edge of the map.

The southern section is dangerous with the retreat tactic, as the zombies can easily split into two groups depending on your movement and tactics. However, the layout can be used to your advantage in this case, as you can decide to retreat through the dormitory.

One option to consider is welding the door to the left of the spawn, and the double door to the right. Doing this will most often result with specimens coming from the dormitory and from the long hallway heading north. A good marksman will make short work of most specimens until the latter levels, in which case it is recommended to only use this strategy as a sharpshooter using the 9mm, a Handcannon, and a crossbow, with maybe a couple pipe bombs as backup.

The eastern section is highly defensible early in the game. you should have a small loop with two double doors. Weld the one near the trader, and wait at the other entrance. Enemies will walk through one door, allowing an easy defence against the incoming monsters.

A single player should abandon this defensive location once fleshpounds start arriving. However, a team of players could hold most of the enemies at bay.

Should you need to escape, you can run to the west to reach the southern area, or to the north.

This section has two staircases to a lower level, a direct corridor to the southern section, and two areas where zombies arrive.

While not easily defensible, you can use this area to slip past zombies.