You're on a strange beach with a fish...sorry, wrong game. You are, however, stuck on the beach of the island you saw in the introductory movie, your wrecked ship visible in the distance. You'll want to explore the island, but first you'll want to look for items on the beach. It looks like some other things washed ashore from Alexander's ship. 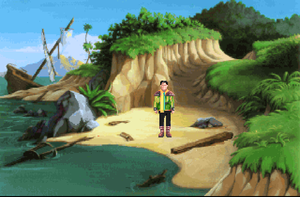 Get Alexander's royal insignia ring and the copper coin.

There's nothing else on the beach to find, and the undertow is too strong for swimming, so walk along the path leading to the island. You'll come to a fork in the road near a large tree: a village is to the left, and a castle is to the right. You could go to either place, but we'll go to the castle first. After all, Alexander is looking for Cassima, and what better place to find a princess than in a castle? 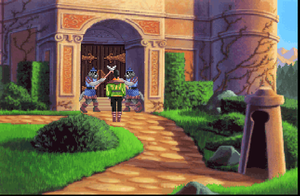 The guards won't let you pass unless you can prove your identity.

In front of the castle, you'll see a couple of guardsmen...er, guard DOGS? Anyway, go ahead and talk to them, and they'll confirm that you've reached the Land of the Green Isles, and that Princess Cassima lives in the castle they're guarding. However, when Alexander asks to see Cassima, they'll say that she's not receiving anyone right now, especially not strangers. 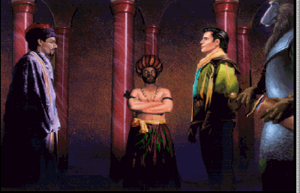 Alexander's audience with the vizier and his genie.

Talking to the guards will do no good: you need to convince them that you're a prince. The only thing you have that could possibly do that is your royal insignia ring. USE the ring on the guard dogs [3]. They'll look at it, decide you're not just some riffraff, and call their leader, Captain Saladin. Saladin will allow you into the castle, where you'll automatically meet with Vizier Abdul Alhazared [2].

The vizier seems like a suspicious fellow, and his story won't do anything to put Alexander at ease. Cassima is sequestered in mourning for her parents, who died several months ago, and is to marry the Vizier shortly. Not what Alexander wanted to hear. There's not much he can do at the moment, though.

Pay attention to the genie, particularly his eyes. He has very distinctive golden glowing eyes. You'll be seeing a lot more of that glow as your adventure progresses.

After your audience, Captain Saladin will escort you out of the castle, and order the guard dogs not to let you in again. It looks like you'll have to find another way into the castle. Maybe someone in town can help you out.

Walk back to the fork in the road, and take the left fork this time to enter the village. There are two stores here, a pawn shop and a bookstore. Go into the bookstore. 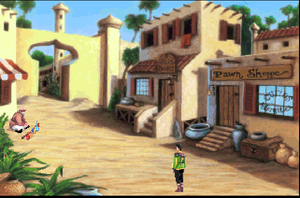 The village on the Isle of the Crown.

Ali, the owner, will greet you as you walk in. You'll also see a mysterious old man with glowing eyes. Remember the genie's eyes? The "old man" is really the genie is disguise. You can ignore him. TALK to Ali [1] to learn more about the island you're on. He'll tell you that there are at least three other islands in the Land of the Green Isles, and possibly more. However, the ferry between the islands isn't running at the moment. Ali suggests that you talk to the ferryman to get more information.

While you're here, there are a few other things you can do. There's a book on a stool near the door that's priced to sell (i.e. free). Use the HAND icon on it to read it [1], and you'll see why: it's the most boring book you've ever read. Ali will beg you to take it off his hands, and Alexander will automatically take the book. 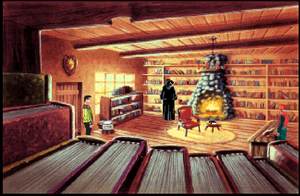 You should also do some browsing while you're here, particularly the shelves on the far right. That's the poetry section: use the HAND on that section to read a love poem from a book [1]. As you read the book, a sheet of paper will come loose and fall to the floor. Use the HAND on the sheet of paper to pick it up [1]. It's the love poem you particularly liked. That's a nice thing to keep around: maybe you'll be able to show it to Cassima sometime.

There's also a book on the counter by Ali. Use the HAND on the book to ask Ali about it [2]. Ali will tell you that it's a valuable spell book, and that he'll take a rare book in exchange for it. A spell book sounds very useful: if you can find a rare book somewhere, you should definitely make that trade.

You've now done everything you can do here: exit the bookstore.

Walk north along the path to exit the village. You'll come to a small cottage with a servant girl (or maybe slave girl) working in the garden. You'll be able to help her later, but for now you can't do anything, so keep walking west along the path to the ferry dock.

As you come to the dock, you'll see a young boy jump in the water and offer to show you the way to the next island. Note his odd glowing eyes, though: it's the genie again. Following his advice will just get you killed, so ignore him. He'll get frustrated with you and disappear shortly. 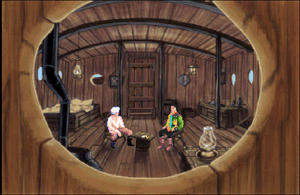 The ferryman's home. Make sure you take the rabbit's foot on the table before you leave.

Use the HAND on the ferryman's door to knock, and then TALK to him when he comes to the door [2]. When you say that Ali sent you, he'll invite you in to talk. Keep talking to him until he starts to repeat himself. He'll tell you that the islands are feuding right now, and that the ferry has been shut down as a result. He can't help you get to the other islands, but he does mention that the pawn shop owner has a magic map. He'll also tell you a bit about the other islands.

Before you leave, use the HAND icon on the rabbit's foot on the table [1]. The ferryman will tell you that it hasn't brought him much luck lately, and he'll offer it to you in the hopes of improving his luck. Hopefully it'll bring you more luck than it's brought him.

After your conversation, head back to the village: it's time to get a magic map. But first, you're going to make a small detour. 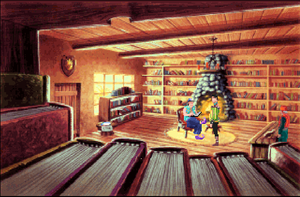 Go back to the bookstore, and you'll see a jolly-looking fellow sitting in a chair and reading. TALK to him, and he'll mention that he's worried about the princess. He has no interest in talking to strangers, though.

Showing your ring helped at the castle: maybe it'll help here as well. USE your ring on Jollo [4]. Once you introduce yourself, Jollo will recognize your name as the prince that Cassima spoke of, and he'll warm up to you considerably. He'll introduce himself, mention that he doesn't trust the vizier, and talk about Sing Sing, Cassima's nightingale. At the end of your chat, he'll suggest that you stop by the bookstore often to check back with him. It's a good suggestion: you need all the friends you can get.

Leave the bookstore and go into the pawn shop. The proprietor will greet you. The genie in his old man disguse will also be there: again, you can safely ignore him.

TALK to the owner: he'll confirm that he does indeed have a magic map, and will trade it for some valuable item. He'll also mention that the same wizard who created the map had some other junk, and he needs to throw it out sometime. One man's trash is another man's treasure, but you'll come back for that. For now, USE the ring on the owner [5], and he'll give you the magic map in trade. Congratulations! You now have a way to get to the other islands. There is one catch, though: the map only works near water. So you can't use it just anywhere: you'll have to be on a beach or at a dock for it to work. 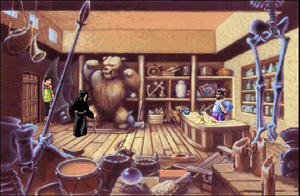 Once you get the map, the genie will grab a mint and stagger out of the pawn shop. You'll then watch a brief cutscene of the genie reporting back to the vizier, and informing him that Alexander has the magic map. The genie seems a bit tipsy, though: looks like mint hits him pretty hard.

Back at the pawn shop, USE the copper coin on the owner [2]. He'll offer you any of 4 cheap items on his counter in trade. The items are a mechanical nightingale, a flute, a tinderbox, and a paintbrush. Take the nightingale.

You're just about ready to leave, but before you do, use the HAND on the owner's candy dish (the same one the genie used) to take a mint [1]. It's time to head to the beach and see if this magic map really works.

Walk back to the tree by the fork in the road. You'll see (and hear) a nightingale in the branches. Could this be Sing Sing, Cassima's nightingale? If so, maybe you can send messages to Cassima through him. 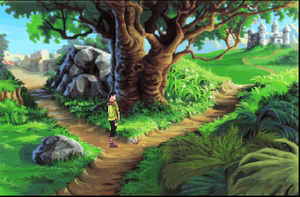 Right now, you can't do anything else useful with the nightingale. Even if it really is Sing Sing, Cassima has no idea you're here. You'll need to send her something to prove you've made it to the Land of the Green Isles, but right now, the only proof you have is stuck in the pawn shop. The shop owner did say he'd trade you back your ring for something else of value, though. With any luck, you'll find some valuable items on the other islands.

Trash from the Pawn Shop[edit]

Walk back to the village, and you'll see the pawn shop owner throwing some stuff out into the barrel in front of his shop. This must be the other junk from the wizard that he mentioned to you. Use the HAND icon on the barrel to collect a bottle of ink [1]. If you use it on yourself, you'll find that it's invisible ink...that turns YOU invisible. Don't use any more of it: it's too valuable to waste. 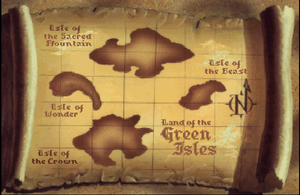