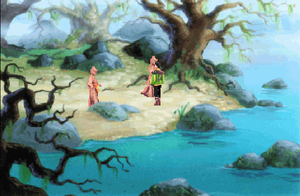 The Druids on the beach seize Alexander.

Upon returning to the Isle of the Mists, you'll see a couple of Druids waiting on the beach for you. How nice, a welcoming committee. The only thing is, these guys don't seem very welcoming at all. Even when Alexander offers to leave, they'll seize him and drag him to the Archdruid. Not a good sign at all.

It turns out that the Druids are having their Rain Festival today, and they need a sacrifice for the festival. You guessed it: you're going to be the sacrifice. The Druids will shove Alexander into a wicker cage, and hoist it over the fire. Unless Alexander comes up with a clever idea really quickly, he's going to be roasted alive! 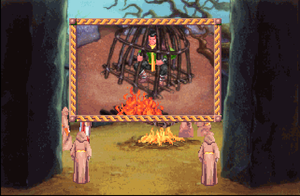 Alexander was hoping for a warm welcome from the Druids, but this isn't quite what he had in mind.

During the subsequent cutscene, Alexander will start to get really hot under the collar as the cage heats up. In fact, the cage will get so hot that it'll catch fire. Alexander will beat out the fire with Beauty's clothes, saving himself for the moment, but destroying the clothes in the process. Still, those flames are getting awfully hot: something needs to be done soon.

In fact, things are getting so hot in here that the lamp you're carrying is getting heated to the boiling point. Boiling...isn't that the trigger for the Make Rain spell? Sure enough, the Make Rain spell will automatically activate [2], leading to a powerful thunderstorm. The thunderstorm will put out the fire, and the Archdruid will conclude that you're a powerful nature wizard, and order you to be let down immediately. Good thing you cast that spell before you came, as it saved your life.

Charming a Creature of the Night[edit]

Once the thunderstorm passes, the Arch Druid will apologize to you for what happened. It turns out that Alhazred warned them about a "foreign assassin", and they've been suspicious of strangers since the Winged Ones stole their miniature oak tree. It's now official: every island has been robbed of their most sacred treasure. 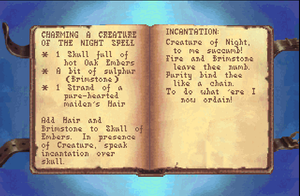 Put together all the ingredients for this spell after talking with the Druids.

After telling you this story, the Arch Druid will wish you luck, and the Druids will leave you in peace. Although they don't realize it, they've given you one more gift: the still-glowing embers of the bonfire are just what you need for the Charming a Creature of the Night spell. USE the skull on the glowing embers to collect them [1], then USE the egg on the skull [1] and USE Cassima's hair on the skull [1]. You now have all the ingredients you need for the spell: all you have to do is find Night Mare and hitch a ride to the Realm of the Dead. You now know that Night Mare likes noxious plants, and you've already run into some. The nightshade atop the Logic Cliffs on the Isle of the Sacred Mountain would have been fatal to you, but it's probably a tasty treat for Night Mare. You know where you need to go: return to the beach and use your map to return to the Isle of the Sacred Mountain.

Going to the Realm of the Dead[edit] 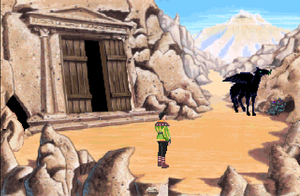 Tame Night Mare with the Charming a Creature of the Night spell.

Climb back up the Logic Cliffs upon returning to the Isle of the Sacred Mountain. Fortunately, you won't have to climb up the whole way this time: the game will take you right to the top after you clear the first screen. 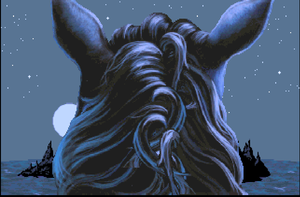 Once you ride Night Mare, she'll take you directly to the Realm of the Dead.

Once you get to the top of the cliffs, you'll see a winged black horse feeding on the nightshade bush. This is Night Mare, the Lord of the Dead's steed. To ride her, you'll need to cast Charming a Creature of the Night. Go to the inventory screen, use the HAND on the spell book, and use the page turn icons to navigate to the Charming a Creature of the Night spell. Use the CAST icon in the spell book window to actually cast the spell [5]. Night Mare will become entranced, and Alexander will be able to get on her back. Night Mare will then take off for the Realm of the Dead.

Congratulations: you've made it to the Realm of the Dead! Now all you have to do is make it back alive, and with the two souls that the Oracle told you about. All in a day's (or night's) work, right?