At this point in the game, you've collected several spell ingredients already, i.e. a feather, sacred water, a skull, a strand of maiden's hair, and a teacup. There are still several more to collect, though. You can't get all of them right now, but you can get a fair number of them. At the end of this section of the walkthrough, you'll have gotten the swamp ooze, the salt water not from the sea, the falling water, and the sulphur. You'll also be able to cast your first spell.

Many of these ingredients can be found on the Isle of Wonder, so that's your next stop. Before you go, though, go back out to the garden path with the hedges, and use the HAND on the white rose bushes to pluck another white rose. If Beauty liked them, Cassima will probably like them as well, and Sing Sing should still be around. Once you have the white rose, go back to the beach and use your map to transport yourself to the Isle of Wonder. 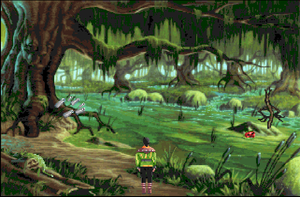 Once you arrive at the Isle of Wonder, walk north to the swamp, and USE the teacup on the swamp. When you do, Stick-in-the-mud will come to life and demand to know what you're doing. When you tell him you're trying to collect some swamp ooze, he'll tell you that the stuff by the path is swamp MUCK, not swamp ooze. The only swamp ooze is over by him, but he won't give you any. His brother, Bump-on-a-log, will also come to life and complain about Stick-in-the-mud's stubbornness. None of that will help you get your swamp ooze, though. Talking to Stick-in-the-mud won't help: he refuses to lift a finger to help you.

If you talk to Bump-on-a-log, he'll complain about his brother, and say how much he wishes he could teach him a lesson. But he has no way of doing that. You can help him with that, though. USE the rotten tomato on Bump-on-a-log [3], and he'll throw it at Stick-in-the-mud. The two will get into a huge fight, and Stick-in-the-mud will throw a bunch of swamp ooze at Bump-on-a-log. After the two brothers fight, they'll make up, and go back to sleep. But you have what you need: a bunch of swamp ooze within reach. USE the teacup on the swamp ooze on Bump-on-a-log to take some [1].

Getting the Salt Water and Sulphur[edit] 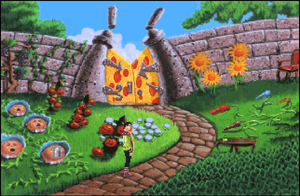 Take the Drink Me potion, and use the lamp on the crying baby's tears.

Walk one screen north to the garden. USE the milk bottle on the baby's tears [2]. The other baby's tears will start crying at not getting any milk. As much as you hate to make babies cry, you need their tears, as one of your spells calls for "salt water not from the sea". Salty tears will be perfect for that. Once the other baby's tears are crying, USE the lamp on the crying baby's years to collect the salt water [1].

Also, you may have noticed that there's a bottle on the table that wasn't there before. Use the HAND on the bottle to take it [1]. It seems to be labeled "Drink Me". You don't have to follow its advice, but if you're curious, go ahead and USE the bottle on Alexander...

Wow, that's some potent stuff! A potion that can stop your heart and then bring you back to life would be of limited use ordinarily, but Jollo did suggest that you convince the vizier you were dead. If you have a chance, drinking some of that stuff in front of the genie would go a long way to persuading the vizier of your untimely demise.

Since you're here, you should try to bring some peace to Chessboard Land. Go through the gates, and the Red and White Queen will automatically come greet you. USE the lump of coal on the White Queen [1], and she'll be delighted that she also has a lump of coal to give as a wedding present. In return, she'll give you the spoiled egg she was planning to give. Of course, the queens are now fighting over who has the better lump of coal, but you can't fix everything. And now you have a source of sulfur for your spell casting. 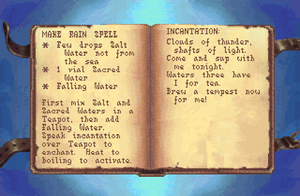 Use the CAST icon to cast the Make Rain spell.

You're almost ready to cast the Make Rain spell: you have the salt water not from the sea and the sacred water, so all you need now is falling water. As it happens, you've just found a ready source of falling water. Remember the fountain from the Beast's garden? That'll give you all the falling water you need. 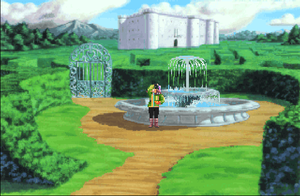 Go back to the beach, use your map to go to the Isle of the Beast, and head to Beast's garden. Go to the inventory screen, and USE the sacred water on the lamp to add it to the salt water already in there [1]. Then USE the lamp on the fountain to add the falling water [1]. You're now ready to cast the spell. Go to the inventory screen, use the HAND icon on the spell book, and use the page turn icons to navigate to the "Make Rain Spell" page. Use the CAST icon on that page to cast the spell [3].

Congratulations, you've just cast your first spell! The teapot is now enchanted with the Make Rain spell, which will be activated once you heat the teapot to boiling. Surely Alexander will be able to find a fire somewhere in the course of his adventures. Head back to the beach and pull out your magic map: you now have an important decision to make.

Regardless of which path you take, you should now have 144 of 231 points.