The Isle of the Mists[edit] 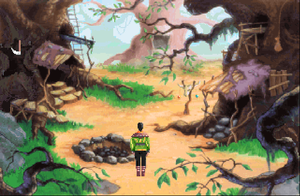 Get a lump of coal and the scythe from the Druids' village.

Once you arrive on the Isle of the Mists, you'll hear drums coming from the northeast. Do not walk towards those drums, or Alexander will be sacrificed by the Druids. Walk west to the village instead.

That's all you need to do here. Go back to the beach, and use your magic map to head to the Isle of the Beast. 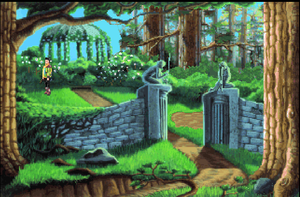 Pick a white rose, and then use the scythe to cut through the vines blocking your way.

Once you arrive at the Isle of the Beast, return to the garden path, and USE the shield on Alexander [3]. Alexander will hold up the shield and walk through the gate. The stone archer will fire his arrow, but it will hit the shield instead of Alexander. The shield will shatter, but Alexander will pass through unscathed.

Now that Alexander has gotten past the stone archer, he can walk through the hedges to the gazebo. Wait, where did these vines come from??!! Some sort of vines will sprout up and keep Alexander from passing. No regular vines can grow so quickly: these must be magically enchanted.

Luckily, you just picked up something which might cut through those vines: the scythe from the Isle of the Mists might be enchanted itself. Before you cut the vines, though, use the HAND on the white rose bushes to pick a white rose [1]. You'll be needing it shortly. After getting the rose, USE the scythe on the vines to chop them down [3]. Once you've cut down the vines, you'll automatically enter the gazebo. 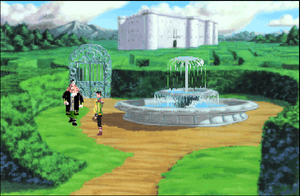 Beast comes out to meet Alexander.

After you enter the gazebo, a cutscene will play where Beast comes out of his palace, and you'll automatically start talking to him [1]. It turns out he's none too pleased to see you, but not because he hates people: it's because the three magical barriers on the island were to keep you out for your own sake. The Beast used to be a handsome prince, but he got on the wrong side of a wicked witch, and she turned him into a hideous beast. Now that Alexander has broken through, the curse is now on him as well, and he's doomed to be transformed into a beast himself!

There is one way to break the enchantment, though: if you find a maiden who will willingly join Beast, the spell will be broken. The Beast thinks that will be extremely unlikely, but he'll give you his ring anyway, in case you do find such a maiden. He'll also mention that the only visitors he's had in years are the Druids, who stole his coat of arms. The plague of thefts has affected every island in the Land of the Green Isles, or so it would seem.

After the Beast gives you his ring, he'll walk back into his castle, and leave you to your fate. You'd better find a maiden quickly, or you'll share in Beast's terrible fate.

Once you've finished talking to the Beast, you have about 10-15 minutes of real time before the curse kicks in and turns you into a beast. You have to solve the puzzle before that time is up.

You need to find a maiden for the Beast, but who? Cassima is your girl, and besides, she's stuck in the Castle of the Crown. Lady Celeste is definitely not the type to ignore outer appearances in favor of inner beauty. There is another maiden who'd be just right for Beast, though. The servant girl in the house on the Isle of the Crown is clearly unhappy there, and would no doubt welcome the opportunity to leave. And she just might take pity on Beast, having suffered herself. 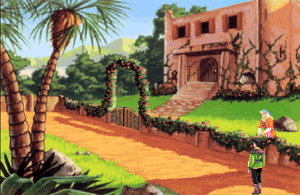 Show the servant girl the white rose and Beast's ring to get her to come with you.

Once you're on the Isle of the Crown, you can make a brief stop in the bookstore before talking to the servant girl: if you're following this walkthrough, you have plenty of time before the curse takes effect. Go into the bookstore, and Jollo will be there. Talk to him again, and he'll have quite a bit to tell you. He'll warn you that the vizier knows you're here, and it would be good if you could convince him that you've left the islands for good, or even died. You can't do that just yet, but it's worth keeping in mind.

Jollo will also give you more information about Shamir Shamazel, the genie. Apparently the genie isn't evil himself, but has to do the bidding of his master. If you could get the genie's lamp, you could become the genie's master. Jollo could swap the lamps if he had an exact replica of the lamp, but he doesn't remember what it looks like. Maybe you'll find out later yourself, and find a replica to give to Jollo.

At the end of the conversation, Jollo will warn you that he can't risk returning to the bookstore again, and wish you luck. Leave the bookstore, and walk north to the house where the servant girl toils. This time, she'll be close to the path, and you can talk to her. She still doesn't trust Alexander, though. You'll have to give her a gift to get her to trust you. USE the white rose on the servant girl [2]. She'll take the gift and thank you for it. Now would be a good time to tell her about Beast. USE Beast's ring on her [2], and Alexander will tell her the story of the Beast. She'll take pity on him and agree to go and live with the Beast. 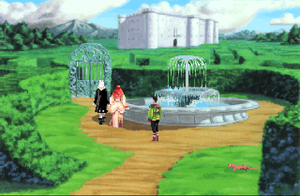 Beauty and the Beast return to his castle after the enchantment is broken.
Another Source of Maiden's Hair
If you didn't get a strand of hair from Cassima's ribbon, you can get one from Beauty's clothes.

The game will automatically cut to you and the servant girl in the Beast's garden [2]. The Beast will come out and ask the servant girl if she willingly consents to live with him. When she does, the enchantment will be broken, and Beast will turn back into a prince. When the servant girl asks the prince if he still wishes her to stay, he'll give her a definite yes, and reveal that her name is Beauty. Using magic, Beast will then clothe Beauty in a beautiful gown to replace her old rags. In gratitude, Beauty will give you her old clothes, and Beast will give you his mirror, which he says can be used to reveal truth. As the happy couple return to Beast's palace, a golden-eyed weasel, i.e. the genie in disguise, will also slink off, presumably to report back to the vizier.

At this point in the game, you have everything you need to get into the castle via the short path, so you can skip ahead to that section if you like. If you want to take the long path through the game, or if you want maximum points, you should continue to follow the walkthrough in the recommended order.