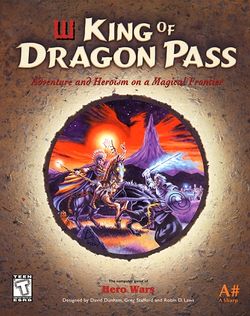 This guide is for THE original Windows game. For the iOS remake, see King of Dragon Pass (iOS).

King of Dragon Pass is a 1999 computer game published by A Sharp. Set in the fictional world of Glorantha, it depicts the lives and fortunes of one of several barbarian clans, settling the untamed lands of Dragon Pass over the course of several decades. The clans bear some similarities, such as fyrds and lawspeakers, to the Iron Age Nordic peoples.

The player controls the seven-member clan ring leading the clan, providing leadership to the clan in all aspects of its life from rituals to diplomacy. The ring can make two macro-level decisions per each of the five seasons in the Gloranthan year. Random events are drawn from a pool of hundreds and are often influenced by previous decisions. In battle, the player determines the goals and preparations, and possibly chooses the actions of his nobles at pivotal moments. To succeed, a player must balance the various needs of survival and prospering, as well as manage the problems presented by the setting or the clan individuals.