Aqua encounters Terra as soon as she arrives, but because he hasn't seen Ventus, her search has only just begun. To start her off, Terra directs her to the Prince. 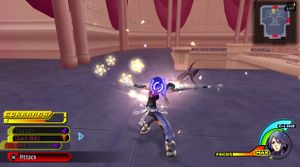 The Unversed spawn only after Lady Tremaine leaves; take this time to level Aqua's Commands.

Aqua begins this world in the Foyer of the castle. Open a chest to the left of the room for a Fleeting Crystal and one to the right for Barrier Surge, a Command that lets Aqua rush through enemies while simultaneously guarding. Up the stairs and to the left is a Potion. To the right is the Thunderstorm Shotlock. In the center of the second floor is a Sticker and the entrance to the Ballroom; take it for a cutscene. Afterward, Aqua obtains a Map and a new objective: pay a visit to Lady Tremaine. Exit the Ballroom and Aqua will come across the Unversed for the first time. Start by defeating all Unversed in the room for some experience; the enemies are weak enough that they pose no threat even without Cure spells. Exit to the Corridor for some more Unversed, and then to the Palace Courtyard. To the right of the staircase is a Hi-Potion, and even further right is Slow. Past that is a save point and a Sticker, and in the corner to the very left of the area is a Potion. Take the path through the Forest to the Chateau; hiding to the right of the building is a Magic Recipe. Approach the entrance for a scene. 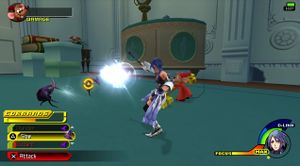 Use Blizzard to shoot Unversed away from Jaq.

Speak to the Fairy Godmother to begin an escort mission: Aqua must keep the Unversed away from Jaq, who is bringing a key to a trapped Cinderella. The mission begins simply enough, with only a few Floods to contend with. They're able to temporarily avoid Aqua's attacks by pooling into the ground only to come back up in front of their target (in this case, Jaq). This makes them a bit of a nuisance, but because they take a while to attack, Aqua can use Blizzard to shoot the unsuspecting Floods from wherever she stands, stunning them and leaving them open to combos. These Unversed are followed by the quicker but still weak Scrappers and lastly, the Bruisers. These should be pushed away from Jaq with area Commands (such as Slow) or a more aggressive series of attacks, such as Shotlock or Spellweaver combos. Barrier Surge is also useful against the tougher enemies, as it allows Aqua to close the distance between her and the Unversed with a jump, pushing them away in the process.

Get Jaq to the Mousehole and press

when close by him to clear the mission and learn the Thunderbolt Command Style. After the scene, Aqua finds herself at the Chateau. Follow the scream into the Forest for a boss fight. 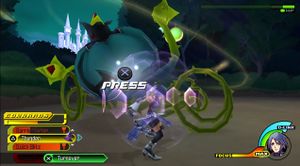 Guard when the Coach twists toward Aqua for an opportunity to attack.

The Cursed Coach can be a bit tough for a first boss, so make sure to have some Potions equipped going into this. It moves quickly by rolling around on its thorny wheels, usually in a semi-circular motion. Its movements vary when it attacks, as it will spin off into a frenzy and damage anything in its path, but fortunately, there is an exploit here. Press

when it comes close enough to Guard against its attack, and then

immediately afterward to perform the Turnover attack, in which Aqua whips her Keyblade up in retaliation to knock the Coach over. This stuns it for a good while as it figures out how to get right-side-up again, but make sure to keep your distance when it prepares to do so, as it will perform a quick spin with thorns out once again before righting itself. The Coach also attacks by swinging its thorns toward Aqua, though this attack is not nearly as threatening.

When the Coach's eyes glow red and it temporarily takes on a shade of black, it will begin to use some new attacks. This includes summoning Unversed that can easily be ignored, though they make for an easy source of HP once defeated. It can also act as a vacuum, sucking in a gust of wind in an attempt to trap Aqua inside of it. Dodge constantly to combat this, and press

rapidly to minimize the damage if caught. Continue to utilize the Turnover attack to defeat the Cursed Coach and give Cinderella her happy ending, forging a D-Link with her and obtaining the Stroke of Midnight Keyblade in the process.