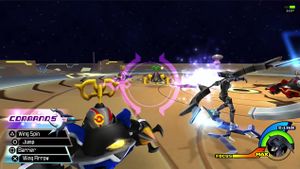 Aqua's Keyblade Glider can act as a bow and arrow, letting her shoot Unversed as they glide by.

After defeating the Unversed, Aqua is tasked with pursuing the fugitives and dispatch the Unversed. Open the chest in the Control Room for an Ether and another out in the hall for a Balloon Letter. Exit to the right to find a long hallway littered with Unversed. At the end of it and to the right is an exit back to the Durgon Transporter, where a Hi-Potion can be found in the center. Exit through a door in a room with red lighting off to the side and Aqua will don her Keyblade Armor for a Glider battle.

can be used to attack here, with

letting her attack at close range and

letting her shoot from a distance. For clearing the battle, Aqua obtains Air Slide, which should be equipped immediately. Back inside the ship, after clearing the room of Unversed, Aqua can Examine the transporter in the center of the room to warp to another area.

Open the chest for a Map as soon as you warp, then head toward the save point. From here, head through the massive double doors to the Turo Prison Block. Again, defeat the many Unversed before gaining access to the rest of the area, in which there are many treasures to be found. Unfortunately, Aqua ends up back in the Control Room. Here, you have the choice to make the trek back to the Durgon Transporter to warp back to the Turo Prison Block, or continue with the world and return for the treasures later. If you choose the former, the treasures in the Prison Block can all be equipped with Air Slide, so make sure to have it equipped. Take the elevator to the right up, then follow the same pattern for the next two to the left. Air Slide across twice to the other side for a Sticker. Drop down to an elevator to the left, then Air Slide to a platform to the right for a Mega-Potion. Back on the lowest elevator of the right wall, take the elevator to the right up. At the bottom of this elevator is an Abounding Crystal, and atop it is a nearby platform holding Blitz. Air Slide twice from this platform to the one across for Teleport. 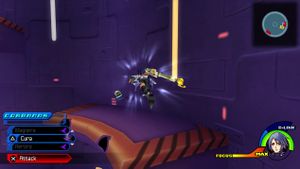 Because some chests can only be accessed with the gravity on, make sure to have Air Slide equipped.

Back at the Control Room, take the left exit to the Ship Hub. Drop to the ground floor of this area and open the chest for Fire Surge before turning off the gravity with the nearby machine. Hop up the platforms until reaching a chest on the fourth floor that happens to be floating on a platform. It cannot be opened this way, so jump across to the computer on this floor and turn the gravity back on, then Air Slide back just in time for the chest to fall back onto the ground. Open it for a new Shotlock, Prism Rain. Turn the gravity back off to reach a Sticker in the center of the room and the next couple of floors, where the exit can be found.

Make sure to equip preferred Commands and Shotlock before taking the exit, as it leads to a boss battle. 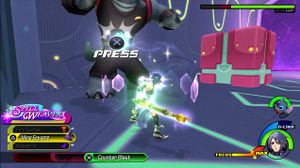 Most of Gantu's attacks can be deflected with Barrier.

Gantu is a massive opponent, leaving Aqua little room to dodge his attacks. Fortunately, Aqua's Barrier is an effective defense against all of his attacks. Press

rapidly when Gantu begins to charge or to shoot; the former is difficult to Cartwheel away from due to his size, and as for the latter, Barrier actually reflects Gantu's shots back at him, dealing a bit of damage on its own. Following these attacks, Gantu will take a break from his offense, at which point Aqua can hammer him with her most powerful Commands. This may include the recently-acquired Fire Surge or Barrier Surge, both of which are quick enough so that Aqua can quickly transition back to a defensive stance if need be. Stitch also plays a helpful role in this battle; when he begins to hop up and down, press

for Aqua to launch the little blue alien onto the titan, distracting him and allowing Aqua to perform some lengthy combos (and possibly even enter a Command Style or two).

For defeating Gantu, Aqua gains an extra slot in her Command Deck. After the scene, Aqua forges a D-Link with Stitch and obtains the Hyperdrive Keyblade.

Return to the Launch Deck where Aqua battled Gantu to pick up some treasures. A Hungry Crystal and a Mega-Ether can be found on the ground floor. After collecting these, turn on the machine at the front of the room to reach some high platforms, one to the right holding Zero Gravira. Drop back down and turn off the machine, then climb the blocks to the right of the room to enter Machinery Bay Access and find a Mega Attack Recipe.