Open the chests in the Main Plaza for a Map and a Potion. Then speak to Horace Horsecaller to be introduced to Fruitball. 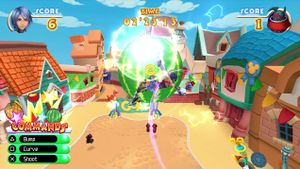 Lob regularly for the most accurate shots.

Fruitball is a mini-game played much like a combination between volleyball and soccer, where fruits are thrown onto the court and must be volleyed over a net until they land in a goal. To clear the world, Aqua must defeat some Unversed in one match of the game (all subsequent matches can be played by returning to this location from the Main Plaza and speaking to Horace). When a fruit reaches Aqua's side of the court, lob it with

. Aqua will jump into the air, at which point you can press

to shoot (make sure to aim the ball in the direction of the opposing goal before doing so). Bananas are especially valuable, as hitting them onto the enemy's side of the court will litter it with banana peels, causing the Unversed to slip upon contact and remain stunned for a while. Likewise, the banana has the same effect on Aqua, so make sure to retaliate immediately when it comes by so as to avoid letting it hit the ground and separate.

If Aqua is the last character played, as in the recommended order, she experiences the closing of the Dream Festival, the award ceremony, on behalf of her friends. 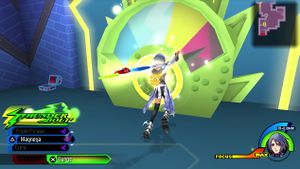 The Thunderbolt Command Style comes in handy when turning on the power in the Gizmo Gallery.

Examine the manhole cover in the Main Plaza to enter the Gizmo Gallery, a maze full of treasures that leads into the massive pinball table of Pete's Rec Room. Begin by opening the two chests on the ground floor, both containing Thunder. Use any Thunder-based attacks to activate the machine at the back of the room, which triggers the elevator across from it as well as the gears above it. On a platform to the right of the elevator (facing the machine) is a Pulsing Crystal and a Mega-Potion. To the left are two of the many gears that make up the top half of the Gizmo Gallery. A hand that lowers to the level of this gear can take her to some more gears to the right, where she can hop along the hands to make it to another platform (holding a Chaos Crystal and a Mega-Potion) or alternatively hop on a hand to the left that carries her to rolling gears. Along the way are some Mickey Mouse panels that can push her off; time your jumps to avoid them and make it to the final platform of the area, holding a Hungry Crystal and the exit. 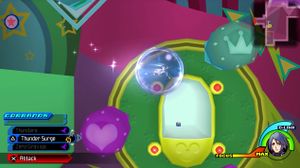 Use Air Slide to move the ball across the table without the use of bumpers.

In Pete's Rec Room, use the pinball machine to launch Aqua to platforms around the area. In the top left is a Panacea and an Action Recipe, in the top right is Aerial Slam, and in the center is a Soothing Crystal and the exit. Beneath this platform is a chest holding Break Time that can only be reached by hitting all four bumpers marked with crowns. Use the exit in the platform above to find yourself on a rooftop at the Raceway. Open the chest here for Slot Edge before dropping down to the ground, where an Abounding Crystal can be found by the stairs leading to the top level and Fira can be found by the exit to the Fruitball Court.

With all treasures collected, you can now play some of the mini-games (go to Raceway Registration and speak to one of the chipmunks for Rumble Racing, speak to one of Donald's nephews in the Main Plaza for Ice Cream Beat, or return to Fruitball and move through the ranks to challenge Pete) or move on to Olympus Coliseum.