Aqua meets the dwarfs, mourning over a comatose Snow White. She agrees to help them by seeking out the Queen. 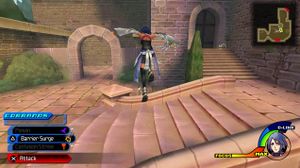 In the Courtyard, hop from the banister to the wall and then to the ledge when Air Slide or High Jump is acquired for a chest.

Behind the Cottage is Payback Surge, down the stream is Poison, and inside the Cottage itself is an Attack Recipe. Back in the Clearing, cross the bridge to the Deep Woods and open the chests nearby for a Potion and an Ether. Past the trees is a Hi-Potion and an exit to the Flower Glade, where a chest holding a Hungry Crystal can be found to the side. Past this area is the Courtyard, where Aqua meets the Prince. After the scene, open the chest under the stairs for a Map and on top of the stairs for a Fleeting Crystal. Past the archway to the left is a Sticker and a ledge holding Fission Firaga which can be reached a bit later on by hopping from the banister to the wall using a High Jump followed by a Sliding Dash/Fire Dash (or an Air Slide once it's acquired), then using the same combination from the wall to reach it. High Jump is obtained much sooner than Air Slide, so the choice you make here boils down to patience. Down the path to the right is a Potion and the exit to the Underground Waterway. 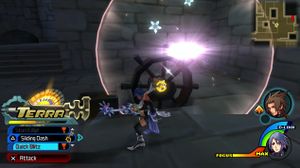 In the Underground Waterway, Aqua can hit levers to open up gates.

Hit the first wheel to open up a timed gate. Head through it in time and then up the steps to find a Shimmering Crystal. Hit the next wheel up here and use Sliding Dash if necessary to get through the next gate in time for a Fleeting Crystal. Rush past the last gate before the timer winds down for Fire, then drop back down and take the exit by the entrance. This should land Aqua in the Vault. Follow the path down the steps to find a Shimmering Crystal and a Spiderchest. Drop down and head around the corner to find another Spiderchest and a Potion. Backtrack around the other corner to find a Balloon Letter. The final chest, containing the useful Magic Command Magnet, can be accessed by lighting the stove around this corner with Fire and then hopping atop the bubbles it produces. Drop down to the left and take the exit for a boss battle. 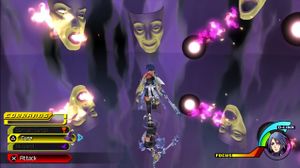 Cartwheel through the fireballs thrown by the Magic Mirror's copies to get to the real one.

This boss battle is the exact same one fought by Terra in his story's Dwarf Woodlands. To reiterate, the Magic Mirror will constantly use the reflections of the mirror realm against Aqua, making multiple copies of itself that either circle Aqua or line up beside her. In the case of the former, watch the copies as they turn and simply find the mirror with a distinct expression (specifically, a smile), then rush it with Barrier Surge or long-reaching Magic. You do have the option of attacking any of the copies, but doing so will deal significantly less damage, and since this is one of the best opportunities to attack, it's wisest to take it. An alternate copy attack is the latter case, in which the mirror's copies create seemingly endless lines that trap Aqua on a narrow path. Cartwheel along this path to avoid any of the mirrors' fireballs, and continue to do so until this attack finishes; attacking back is impossible, and will only result in Aqua taking damage. Occasionally, the mirror will just float around aimlessly. This is another optimal time to attack it, provided it doesn't transition into its charging attack. If Aqua isn't able to catch it in time, use Shotlock.

For defeating the Magic Mirror, Aqua obtains an extra slot in her Command Deck. After some scenes, Aqua forges a D-Link with Snow White and obtains the Treasure Trove Keyblade.