This is Aqua's final world, so make sure to leave no unfinished business behind in other worlds and do some grinding in the twisters of Twister Trench in preparation for her final battles. There are three chests and one Sticker in the starting area, the Seat of War: a Mega-Potion directly behind Aqua, an Elixir in a wide nook off the path, and a Map by the exit. In the next area, Aeroga and a Mega-Ether can be found by the rock formation in the center, a Megalixir along the left wall, and a Mega-Potion along the right. In the next area is a Sticker and a save point. The exit here leads to a gauntlet of bosses. Proceed when ready. 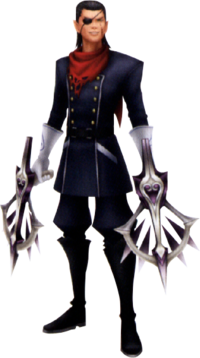 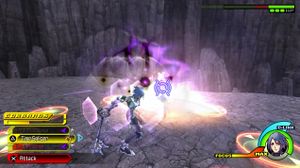 Mines and Barrier should be used to Aqua's advantage.

As he has given into the darkness, Braig's powers have multiplied since his battle with Terra. As he has access to new attacks, and Aqua's battle style is different than Terra's, a different strategy must be followed. As with Braig's battle with Terra, Aqua has access to Shotlocks, Command Styles, and D-Links. However, the boss's constant warping will make it challenging to fully benefit from these special powers and abilities.

At the start of the battle, Braig will go immediately on the offense. He will warp to Aqua's location, charging at her while firing energy bullets. This can be avoided with Cartwheel or Barrier. It is also recommended that Aqua use the Mine Square ability on the slight chance that Braig will collide with the mines, taking damage as a result. Aqua should then continue with a hit-and-run strategy, bombarding Braig with physical attacks or, preferably, magic. As Braig goes on to fire bullets from the air or ground, either Cartwheel or Barrier can be used to avoid damage. 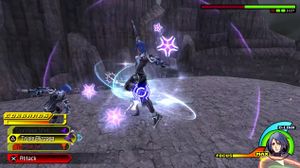 With Time Splicer, Aqua attacks so quickly that she leaves behind an afterimage, letting her combo Braig into the air.

A Barrier and Counter Blast combo can also be used when Braig runs around Aqua, firing while running at a fast pace. As he is at close range, this is the best way to prevent damage and still strike the boss. As in the battle with Terra, Braig will charge the power of his Arrowguns before firing a massive energy bolt. Cartwheel out of the way to prevent damage, and try to strike him with magic or physical combos before he fires to cancel the attack.

As Braig's HP starts to dwindle, he begins to take things seriously. Warping to the center of the battlefield, he will fire a series of bolts with a long range while spinning around in place in circle. Careful use of Cartwheel or Barrier is the only recommended way to prevent taking damage. When Braig leaps into the air at the battlefield's center, twirling his Arrowguns overhead, immediately chain together Cartwheels, or fall victim to several large bullets of energy as they rain from portals of space Braig summons. One can also simply run along the very edge of the battle area, but be advised that these bullets have slight homing capabilities and have a relatively long range.

As in the battle with Terra, Braig should not be a challenge. Patience is the key to beating him, as always. Make full use of the Cartwheel and Barrier abilities, as well as the Barrier and Counter Blast combo. Renewal Barrier is effective, as Aqua will be using Barrier a lot. Mine Square is also useful if Braig warps to Aqua's location before or after executing an attack. Heal if necessary, and make full use out of whatever extra power Command Styles, Shotlocks, or D-Links grant. So long as this is done, Braig should fall relatively quickly. 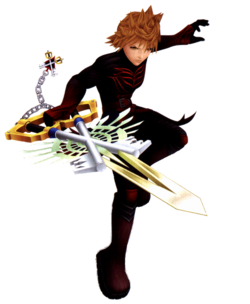 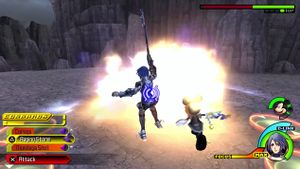 Powerful projectiles such as Triple Firaga, Triple Blizzaga, and Thundaga Shot are safe yet effective attacks.

At the beginning of this climatic confrontation, Lock-on to Ventus-Vanitas and press

when prompted to execute the Burst of Faith command with Mickey. This command grants Aqua much-needed invulnerability, deals continuous damage so long as

is tapped repeatedly, and possesses a powerful Finisher that will send the boss flying and interrupt any attack he attempts. Use Seeker Mine to interrupt Ventus-Vanitas as he rushes around the battlefield in a Sonic Blade-like fashion, and if the boss ever dives underground and becomes visible only through a moving pool of darkness, chain multiple Cartwheels together to avoid the barrage of fireballs that erupt as he attacks Aqua from below. Cartwheel can be used to avoid the crescent-shaped wave of energy Ventus-Vanitas launches after his two-hit χ-blade combo, and it is also an effective way of dodging the wave of dark energy bolts he sends towards Aqua from above. If Ventus-Vanitas is knocked off his feet at any time, he drops down from above and strikes Aqua with a χ-blade swing that spawns large icicles when he lands. Cartwheel is the best means of avoiding damage. 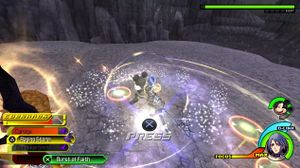 Follow the onscreen prompt when called over by Mickey for a powerful new attack.

When Ventus-Vanitas's HP drops to about half of its total amount, he gains access to an ultimate attack whose execution is signified whenever the boss warps to the center of the battlefield and begins charging power. It is at this time that Aqua should be the most aggressive towards him, but be sure to execute Burst of Faith or a Shotlock as soon as he leaps into the air to avoid the intense burst of energy that follows. There is a small chance that Aqua can avoid this attack by repeatedly using Cartwheel along the very edge of the battlefield, but it is important to use Curaga immediately afterwards if she is hit. Depending on Aqua's level and stats, this energy burst can very well spell her end.

In terms of countering Ventus-Vanitas, the boss is best attacked with commands skilled at following mobile targets, such as Firaga Burst and Time Splicer. Even Shotlocks are useful. Ventus-Vanitas is slightly more intelligent than Vanitas is when it comes to avoiding Seeker Mine, so Aqua should be on her guard at all times. Ventus-Vanitas is swift, and he attacks almost unceasingly. Therefore, a continuous hit-and-run strategy should be used if one wishes to survive this fight. Aqua need not worry about Mickey's HP if it is fully depleted, as he revives himself in a matter of seconds. His attacks, in combination with Aqua's, should easily be able to conquer Ventus-Vanitas.