Aqua's first task upon arrival is to defeat the Unversed outside of the Coliseum. Hercules is a party member here, though Aqua should be much more powerful than him by this point. After the battle, Phil suggests she enter the tournament for a potential meeting with Terra. Open the four chests in this world (Fire Strike, Cura, and a Mega-Potion along both ends of the Coliseum Gates and the Map in the Vestibule) before speaking to Phil to begin the tournament. 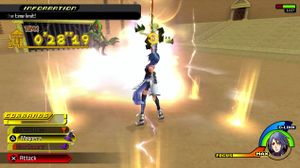 Use a Mine attack after approaching the Unversed to launch them into the air.

Before entering, make sure to equip Commands effective against crowds, which Aqua should have a good amount of by this point (this includes Mine Square, Zero Gravity, and Magnet). The first round consists of only three Scrappers, which should be taken care of easily by this point. The second round, a lone Bruiser, should also pose no threat. The third round, three Spiderchests, is a little trickier due to their ability to burrow into the ground, delaying any of Aqua's offense. However, as long as one of the aforementioned Commands is used immediately, they should be dealt with quickly. The fourth round's group (an Axe Flapper, three Red Hot Chilis, and three Blue Sea Salts) is also much more evasive than the preceding opponents, but again, use one of the aforementioned Commands before they can separate, and Shotlock to shoot them out of the sky if necessary. The fifth round consists only of three Me Me Bunnies, while the sixth round consists of two Axe Flappers and three Mandrakes. Cartwheel through the Mandrakes' projectiles before using an area spell or a freezing attack, such as Freeze Raid or Ice Barrage, on the group.

The sixth round consists of three Buckle Bruisers. Again, spells like Mine Square, Magnet, and Zero Gravity work best. The eighth round (two Red Hot Chilis, two Blue Sea Salts, and a Chrono Twister) should be cleared with the same strategy, as well as the ninth round (six Shoegazers) and the tenth round (thirty Jellyshades). Following this is a scene and a boss fight, for which Aqua is given some time to prepare. Speak to Phil once ready. 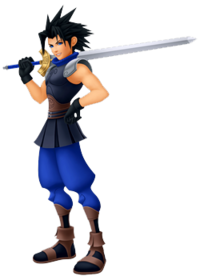 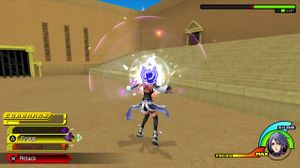 Zack is weak to most status ailments, one of the more useful being Freeze.

The Zack fought here is the same as the one fought in Terra's story, before the darkness takes hold of him. Because he doesn't have any of his more vicious darkness-infused attacks, he should be defeated rather easily. He only has a couple of attacks, his go-to being slamming his sword into the ground after a jump to create a shockwave. While this attack is quite powerful and has a wide range, it is also slow, and Zack telegraphs it beforehand when he jumps into the air. With this in mind, it can easily be avoided with a Cartwheel or Barrier Surge. Zack's only other attack is a swipe of his sword, which he performs rarely when Aqua is at close range. This doesn't do nearly as much damage and can easily be countered with a Reprisal Command or a Barrier.

As far as offense goes, Zack can be rendered defenseless rather easily with Aqua's wide array of status-inflicting Magic. Blizzard and Freeze attacks give Aqua the opportunity to use one of her slower powerful Commands. Zero Gravity and Magnet are useful when caught in a tight spot, as Zack will be launched into the air with no means of counterattack. Confuse makes him less likely to perform his shockwave attack as he struggles to redirect himself, and Sleep also leaves him open to attack. In short, the only status that Zack is unaffected by is Mini. Take advantage of his weaknesses to advance to the final match, which Aqua is again given time to prepare for. Speak to Phil to begin. 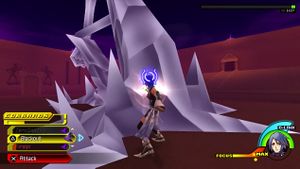 One Fire attack in Aqua's Deck should be sufficient for the Ice Colossus.

The Lord of the Underworld brings a friend along to battle Aqua, but she isn't intimidated and she has no reason to be. For starters, the Ice Colossus is not as dangerous as the Ice Titan, a secret boss in the first game of the series. It occasionally utilizes its ice breath and shoots shards of ice in Aqua's direction, and can also create shockwaves by stomping its massive feet on the ground. However, it is incredibly weak to Fire attacks, and can be incapacitated if its legs take enough damage. It can also be ignored completely if you would rather direct your focus at Hades first, who has much more mobility and is a bit more aggressive. 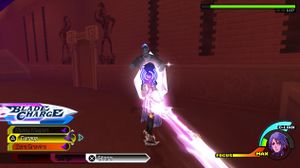 Hades has two phases of attacks. The first consists of his regular offense, which primarily involves hovering toward Aqua to lob a fireball her way. Cartwheel away just as he throws it, then attack. Unlike his icy partner, Hades is particularly weak against the Freeze status ailment. This can be inflicted easily with Freeze Raid, which also deals a good amount of damage. Hades' second phase is entered as a retaliation to Aqua's offense, apparent in the change in his appearance. Rather than his usual blue skin tone, Hades is now red and angry, punctuated by the bright red flames on his head. He is also invincible. If you've played other games in the series, this state should be familiar. Unfortunately, all Aqua can do at this point is dodge his attacks and wait. Hades' new attack in this form has him summon large streams of fire from his fingertips, moving them in a circle to cover a wide range around him. Still, Aqua can Cartwheel away from him when he initiates this attack, as he moves toward her rather slowly. Once this attack is over, Hades will return to his regular state, at which point Aqua can continue to attack him.

Defeat the duo to learn the Diamond Dust Command Style and see the world's closing scene, after which Aqua forges a D-Link with Zack and obtains the Mark of a Hero Keyblade.