The Secret Episode is a Final Mix-exclusive bonus chapter that follows the Final Episode. In it, Aqua's time in the Realm of Darkness is explored. To unlock it on Standard, the player must complete the Sticker Album and defeat 9,999 Unversed to obtain the Keyslinger Trophy, complete the Sticker Album on Proud, and simply clear the Final Episode on Critical. 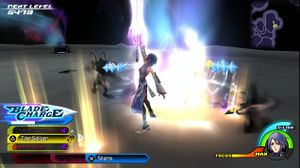 Defeat Heartless that spawn out of pools of darkness to move on.

Once Aqua becomes playable, she can access a nearby save point before moving forward. Along the path are battles with enemies new to Aqua: Heartless. First, Aqua must defeat a group of Shadows and Neoshadows to obtain freedom. Afterward, you can approach the dark orb as instructed by the short scene, fighting off some Darkball and more Neoshadow Heartless along the way. Within the vicinity of this battle is also a chest containing a Balloon Letter. Once done with this area, return to the fork and take the other path for another battle against some Heartless and a chest containing Zero Graviga. Further down this path is an exit leading to more Heartless and a chest containing Blackout. 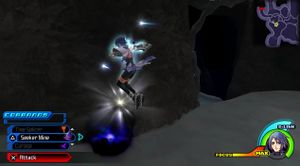 Hop on the orb to fight a battle that opens up a new path, which Aqua can subsequently hop on another orb to reach. Before continuing, open a chest to the far left for a Chaos Crystal. At the end of the newly-opened path is another dark orb that launches Aqua up to more Heartless. After defeating all Heartless, Aqua will have access to some new platforms. Climb them and follow the narrow path to find a Secret Gem. Exit to the next area from here, where numerous Heartless spawn out of massive pools of darkness in the ground. Find a Megalixir to the left and Triple Firaga to the right, then drop down from this area and into the depths below. Open the chest for Transcendence before continuing back up. Following the final battle with swarms of Heartless, Aqua will have access to a save point and the exit. Once prepared, take it to a boss battle. 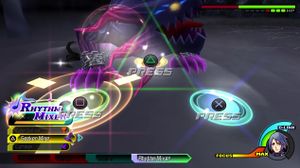 The Dark Hide is a fast, fierce, and unpredictable opponent. In the first phase of the battle, the Heartless attacks from within the darkness, visible only by its glowing red eyes. It will attempt to charge at Aqua, and when it does the battle shifts to its point of view, making it hard to dodge. It also attacks with claw swipes and tail spins. The best way to deal damage to the Dark Hide in this phase is to wait until just after the scene where it looks at Aqua through its point of view, then quickly use Barrier to block the attack and use Aqua's counterattack to deal damage. The Dark Hide will then stand idly for a few seconds before returning to the shadows, so be sure to get as many Keyblade strikes in as possible.

If Teleport is equipped, Aqua will sometimes teleport behind the Dark Hide instead of blocking its attack with Barrier. This leaves the Heartless vulnerable as all of its attacks are focused on what's in front of it. After losing one and a half health bars, it will reveal its true form, starting the next phase of the fight. 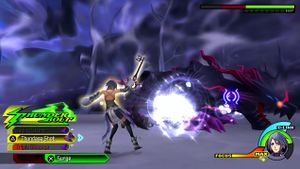 Use Rhythm Mixer and powerful projectiles to deal the finishing blow.

The second stage of the battle is the same as the first, with the exception of the new attacks in the boss's arsenal. Dark Hide still retains its claw swipes and spin attacks, but can now charge at Aqua, leaving a trail of flames in its wake. Also, the Dark Hide's movements become more erratic, making it hard to land hits. The Rhythm Mixer Command Style finisher deals great damage to the boss. After another round of combat, the Heartless unveils the rest of its attacks.

In the final stage of the fight, the Dark Hide now uses red, blue, and green afterimages of itself for offensive and defensive purposes. It may spin around Aqua, its afterimages charging at her while it slams the ground, creating a shockwave. Dark Hide can also shoot dark energy orbs that expand after a few seconds, damaging Aqua if she steps to close. It also utilizes a variant of Mega Flare, wherein it shoots a large fireball at Aqua. Be sure to heal when necessary.

For now, enjoy the scenes that follow, as the Secret Episode ends upon discovering the Castle of Dreams. Aqua's journey through the Realm of Darkness is continued in Kingdom Hearts 0.2: Birth by Sleep – A Fragmentary Passage.