In the field of the Castle of Dreams, Terra learns that just believing in one's dreams can go a long way... 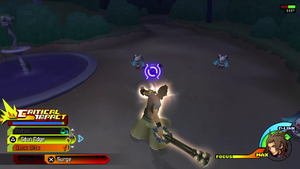 Get the jump on the Hareraisers; giving them an opportunity to attack can prove deadly.

This battle is more or less the same as the first battle in the Enchanted Dominion. Guard against the Bruisers, Be aggressive against the Scrappers, and avoid the Floods. A new Unversed will make it's way into the fray upon the second wave of enemies: the Hareraiser. The Hareraiser is a small Unversed that uses it's massive ears to cause damage. Long-range tactics are recommended for defensive players, for their attacks are completely unpredictable, and all of their attacks can interrupt your combos and attacks. They can destroy a lot of your HP in a little amount of time, being especially devastating when paired with Bruisers. Attack them from a distance. Their attacks are Guardable, but are too random to accurately predict.

Before proceeding forward, backtrack to the area behind your original starting point. This the Tremaine Estate, where a treasure chest containing Thunderstorm and a Sticker are hiding behind the house's right side. Once done, defeat (or ignore) the Unversed that appear and leave the area. When you enter the forest, you will notice that there are no Unversed in this area now. Come back here upon revisiting the world to fight waves of them if needed. For now, proceed further. 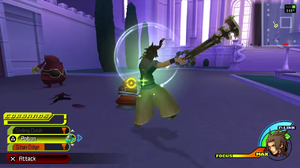 Upon entering the Palace Courtyard, a new type of Unversed will be there to greet Terra: the Shoegazer. Shoegazers, like Hareraisers, are unpredictable but are much more frail and are easier to hit. Once their HP reaches a halfway point, they will slink down into their shoes, Guarding (and becoming immune to) all attacks for a brief time. The moment they peek back out, destroy them. These guys are horrible in packs, since if one attacks, the rest usually will. Luckily, their attacks are Guardable. After all that is done, have Terra jump into the pool in the Courtyard's center. After defeating two waves of Red Hot Chilis, (Which should be no trouble at this point) a new type of enemy will appear: Prize Pods.

Prize Pods are non-hostile Unversed that will run from you instead of engage you. Why? Because as their name suggests, they have goodies inside of them! Attacking a Pod will grant the player an Ice Cream Ingredient. These will not be important until you reach Disney Town later on, but if you can get them, why not? To make the most out of Prize Pods, you'll need area-of-effect Commands as well as Commands that can hit the enemy multiple times, neither of which Terra has at this time.

After attacking the Pods, ransack the Courtyard of four treasure chests lurking around its corners (Slow to the right of the entrance and a Map by the left wall near the save point), including the one hiding behind a bush on the right side of the Castle Entrance containing a Wellspring Crystal and one to the left of the Castle Entrance containing Pulsing Crystal. Once you have plundered the area to your desire, run up the stairs for a new scene.

Escort Cinderella to the Ball[edit] 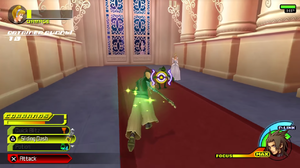 Attack any enemies that target Cinderella; prioritize her health over Terra's.

The goal in this battle is to allow Cinderella to reach the other side of the corridor while having her take as little damage as possible. The Unversed will primarily focus on her throughout the battle, so have Terra nearby her at all times during this trek. Cinderella has her own health bar at the top of the screen that gauges her stamina that will fill up a bit more with each hit she takes from an enemy. If it fills up to full, you lose the fight and will have to retry. If Cinderella is in danger, an X button prompt will appear nearby the Command Deck. Pressing X during this time will teleport Terra over to Cinderella regardless of her current location. Pressing X again will have Terra jump into the air and slam the ground with his Keyblade, crippling (if not outright destroying) any enemies caught in the blast. Once Cinderella reaches the other side, talk to her to end this segment of the battle.

The second portion of this battle takes place in the Foyer of the Castle, where three Bruisers are waiting. All of the damage Cinderella took in the previous segment carries over here, making this harder. One thing you can do is lose this segment once and choose to Retry. You will restart this segment rather than the entire battle, starting out with Cinderella's Health Gauge back down to minimum.

Bruisers will slaughter Cinderella's Health, so this welcome wagon can be approached one of two ways. You can either activate the Aqua D-Link and blast the enemies with Magic, hoping they die before they get a chance to attack. Or, Terra can obliterate (or at least weaken) the three enemies with a Shotlock barrage. Regardless of your choice, once the Bruisers are gone, treat this segment as you would the first, letting Cinderella reach the ballroom in one piece.

After winning this segment, you receive the Counter Hammer Command and a new cutscene. 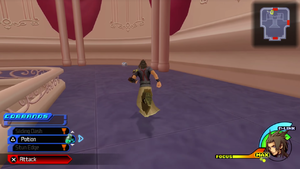 Use this time before the boss fight to pick up treasures and do some grinding.

The Counter Hammer Command should be equipped right away. Whenever you Guard an enemy's attack, you'll have the chance to use Counter Hammer. It works the same way it did during the Escort mission, with Terra slamming his Key into the ground with a damaging shockwave. This works great against enemy bum-rushes, but can only be used if Guard is successful. After equipping Counter Hammer, loot the treasure chests on the corners of the upper balcony (to the right of the starting point is a Hi-Potion and to the left is a Soothing Crystal). Don't forget the ones hidden underneath the sides of the stairs as well (for a Potion and Strike Raid). Once you have looted the Foyer, enter the next area through the door to the left.

The moment you enter the area, there will be a Sticker in plain sight hovering just out of reach. Ignore it for now. Run through the corridor, taking out (or fleeing from) Unversed as you go. Three Bruisers will impede you halfway through the corridor that will insist you stay and fight. Counter Hammer works great against enemies like this, since using it will stun them. After defeating the Bruisers, enter the next area. There's a treasure chest containing Thunder hidden behind a table next to the save point and a Command Shop across from the save point. Do what you need to, save your game, and then enter the next area. 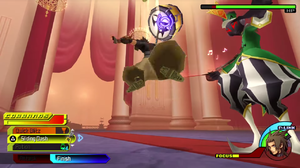 This is by far the game's easiest boss battle. The Symphony Master is surrounded by three instruments, each with their own HP Gauge. Instead of attacking the Master directly, target each of its instruments one at a time, bombarding them with continuous aerial combos. If one follows this aggressive strategy, the instruments will never get the chance to attack. Whenever an instrument is destroyed, it will drop HP Orbs, replenishing Terra's HP if he is unable to do so himself. Once all three instruments are destroyed, confront the Symphony Master.

Without its instruments, the Master doesn't seem to be able defend itself much. The worst it will do is twirl it's baton for multiple hits that may interrupt Terra's combos. However, the attack isn't deadly unless Terra's HP is below the halfway point, in which case Shotlocks or the Aqua D-Link serve as alternate strategies. The only real rule to follow here is to pummel the Master into oblivion with an aggressive and relentless assault. Using this tactic, the Master will fall in less than five minutes.

You will gain both the Cinderella D-Link and the Stroke of Midnight Keychain for completing the Castle of Dreams. While Stroke of Midnight doesn't grant any boosts to your Strength and Magic, it does increase how often you can land critical and high-damaging attacks.

After completing the world, return to the save point in the Antechamber (the area just before where the Symphony Master boss battle started) and enter the Ballroom from here. Terra will find himself on the balcony where the Unversed were watching the ball, with a treasure chest containing a Fleeting Crystal that couldn't be found before.