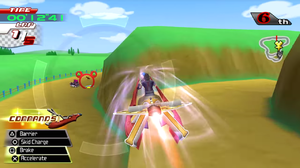 Take the shortcut to the right off of the first ramp to take the lead.

As soon as Terra enters Disney Town, he is thrust into the world of Rumble Racing. This world consists solely of mini-games, with Terra's story introducing the basics of the kart racing game. Speak to the chipmunks to get started; your task here is to beat all other racers and come in first. Keep accelerating with

, and if necessary, brake with

. The difficulty of drifting (accomplished by simultaneously braking and accelerating while turning) may make this mini-game mildly irritating, but it's doable as long as Terra is aggressive. Attack any racers that Terra can target with

, and block any incoming attacks with

. Take note of the ramps and boost pads placed around the track, and the shortcut to the right off of the first ramp. There are some hazards toward the end of the track in the form of tornadoes that are entirely capable of tripping Terra up if he comes into contact with them, but they are avoided fairly easily due to their slowness. With these tips in mind, Terra should take first without much trouble. Doing so will clear the world, earning you the Disney Town Command Board as well as access to the other mini-games that the world has to offer.

Turn around to leave the Raceway Registration and exit to the next area, the Raceway. Open a chest under the bridge for Payback Fang, and another up the stairs and across the bridge for an Abounding Crystal. Continue up another flight of stairs to the Main Plaza. To the right as you exit the Raceway is a Map, and to the left is a Potion. Head around to the other end of the area, where you should see a save point and the entrance to the Sewers. Examine the manhole cover to enter, and open the chest up ahead for a Thunder command. Continue left, and at the end of the path you should find a machine and another chest containing Thunder. Now equip all Thunder-based attacks you have for the next sequence, in which you must lock on to the machine and use these attacks to move the gauge forward. If successful, an elevator in the area should begin to operate, allowing Terra access to the second floor.

On a platform to the left of the elevator is Absolute Zero and a Mega-Potion. Ride the elevator to a spinning gear, and hop onto a hand that lowers and rises, carrying Terra to another gear. You will now have the option of traveling to the left for the exit or to the right for chests. For the chests, hop on the hands and use Air Slide when they all drop to reach a platform holding a Chaos Crystal and an Action Recipe. For the exit, simply hop onto the gears, using Air Slide if necessary, to reach a platform holding Panacea and an exit. Head down the passage to find Pete's Rec Room, which houses a massive pinball machine. Drop into the slot and use

when the boxing glove lowers completely to be launched into the machine. A platform to the top left holds Zero Gravira and one to the top right holds Aerial Slam. A platform in the center holds Chaos Crystal and an exit to the rooftops of the Raceway, where you can find a chest containing Slot Edge to the left. Back in the pinball machine, hit all four bumpers marked with a crown to unlock a platform below the central one, earning you the Break Time command.

Before moving on, Terra can complete the Rumble Racing mini-game by returning to Raceway Registration and speaking to the chipmunks, or he can try one of the other mini-games: Ice Cream Beat by talking to one of Donald's nephews in the Main Plaza, or Fruitball by speaking to Horace Horsecollar at the Fruitball Court.