Upon landing, Terra encounters the Queen, who gives him an ominous task. Meanwhile, Terra continues his search for Master Xehanort... 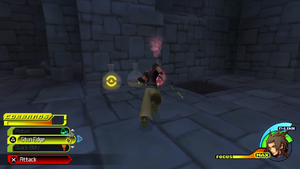 Smash these flasks for a boost dependent on color.

After the scene, exit to the next area. On your way to the far wall, some Floods, Red Hot Chilis, Scrappers, and a Bruiser will spawn, which should be dispatched quickly. Open the small chest for an Ether and the larger chest to spawn a surprise enemy, the Spiderchest. From now on, be wary of any larger chests, as they may just sprout legs and perform a sneak attack. Take note that any of the flasks/beakers in the area can be smashed for HP (green) or D-Link prizes (blue). They constantly change color, so make sure to destroy them at the right time to attain the prize that you desire. Be warned, however, that there is an extra color in the mix (red) that will result in a damaging explosion if smashed. After clearing the area, continue forward to come across another open space. 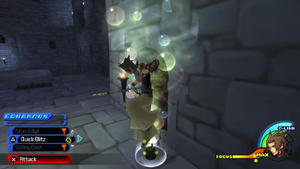 Use the bubbles to reach higher ground.

To the right of this next space are some bubbles. Use

to launch off of them, and grab the ledge if necessary to make it to the upper level. The first large chest here is another Spiderchest in hiding. After another round of Floods and Red Hot Chilis, open the smaller chest for a Potion. At the end of this path is an exit. Before leaving, open a chest on the lower level for a Balloon Letter. ForFlame Salvo, activate a second set of bubbles by using a fire command on the stove by the platform in the center; atop the platform is the chest. Exit to the Underground Waterway. 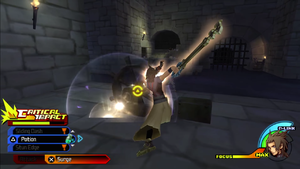 Hit the switches to open up new paths.

Hit the wheel on the next platform (across the shallow water) to open a gate. Head left from the entrance and follow the path up for a Potion and another wheel. After opening up another gate, pick up the Block Recipe, and past a third gate are Poison Edge and Fire. Return to the entrance and head right this time. Atop the ledges at the end of this path is the exit to the Courtyard. Head through for a Potion close by and a save point (along with a Command Shop) up ahead. Beneath the stairs is a Map and on them is a Soothing Crystal. For a platform holding Fission Firaga, High Jump or Air Slide is required (use Air Slide off of the post of the stairs to reach the short wall, and use Air Slide again to reach the platform). Head through the massive double doors to leave the castle grounds and finally find Snow White. Unfortunately, Terra's discovery is cut short by an Unversed attack. While the crowds may be overwhelming, you will not encounter any enemies you haven't seen before. For clearing the battle, Terra obtains Air Slide, which can be used to access the aforementioned Fission Firaga. Open the chest in the corner for a Hungry Crystal, then return to the Courtyard and from there, the Underground Waterway.

Return to the Vault and prepare yourself for a boss fight before entering the Magic Mirror Chamber. 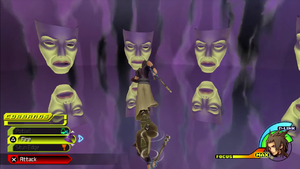 Look for a smile to find the real Magic Mirror.

The Magic Mirror can be a tough fight for the relatively slow Terra, but as long as you maintain control, it shouldn't be too difficult to defeat. It will constantly use the reflections of the mirror realm against Terra, making multiple copies of itself that either circle Terra or line up beside him. In the case of the former, watch the copies as they turn and simply find the mirror with a distinct expression (specifically, a smile). You do have the option of attacking any of the copies, but doing so will deal significantly less damage, and since this is one of the best opportunities to attack, it's wisest to take it. 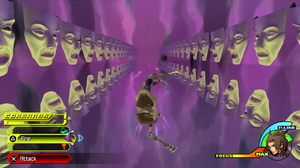 Dodge constantly during this attack.

An alternate copy attack is the latter case, in which the mirror's copies create seemingly endless lines that trap Terra on a narrow path. Slide along this path to avoid any of the mirrors' fireballs, and continue to do so until this attack finishes; attacking back is impossible, and will only result in Terra taking damage. Occasionally, the mirror will just float around aimlessly. This is another optimal time to attack it, provided it doesn't transition into its charging attack. If Terra isn't able to catch it in time, use Shotlock. If it performs an attack in which it charges side to side, dodge or use Shotlock for invincibility frames. If it performs an attack in which it aims itself toward the ground, shooting fireballs as it floats along, Slide away, as this can be dodged easily. If it is stunned off of a combo, it will fall to the ground, creating another combo opportunity. Defeat the Magic Mirror for an increase in maximum HP and Firestorm, a new Command Style entered through Fire-based commands.

If you have cleared the worlds in the order specified in this guide, then after leaving the world, you will be directed to the Mysterious Tower. Open the chests outside for a Pulsing Crystal (far left), a Balloon Letter (left of the tower), and Cure (right of the tower). Head inside and pick up the Magic Recipe beneath the stairs, then follow them up for a scene. Go to the Badlands for another scene before moving on to the next world.