This is the final world in Terra's story. Use a save point to return to the World Map if you have any unfinished business. If not, prepare for the tough battles ahead. 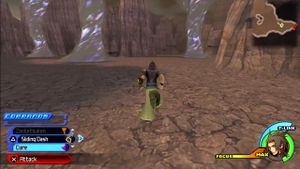 The whirlwinds in Twister Trench act as infinitely-spawning random encounters, making it a prime spot for grinding.

Open the chests in this area for an Elixir, a Mega-Potion, and a Map. Continue down the path to the next area, which is populated by whirlwinds. If Terra is swallowed by one of these, he will be thrust into a battle against rounds of Unversed, including some that are drastically enlarged. Consider these battles to be practice and use them to grind. If you wish to avoid them, you can Slide away as they approach, but fighting at least a few of these battles is recommended due to the valuable experience they give out.

To the right of the first rock formation in the center is a Mega-Potion, and to the left of it is a Sticker and Windcutter. On the wall to the left of the rock formation is a Megalixir and toward the end of the path is a Mega-Ether. Exit to the next area to find only a Command Shop and a save point. If there is anything you'd like to do before the conclusion of Terra's story, do it now, as this is your last chance. Once ready, proceed down the narrow path to the Keyblade Graveyard itself. 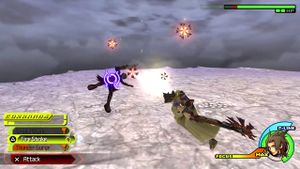 If Terra has a Keyblade with long reach, he can catch Vanitas with an attack mid-dodge.

With two opponents, Terra has his work cut out for him. Fortunately, Terra only really has to defeat one of them, and since Xehanort mostly keeps to himself (unless Terra provokes him with an approach), Vanitas should hold your attention for the bulk of the battle. Vanitas is far speedier than Terra, but Terra can potentially make up the difference with his strength and size. Vanitas starts out with only a few attacks, the first being a fireball that splits in three before homing in on Terra, and the second being an aerial spread of lightning shots. The key to dodging these attacks is to Slide away as they come close to making contact, then perform a quick counterattack such as some variation of the Sliding Dash or Thunder Surge. Vanitas has some tricky defensive tactics, with the more common move early on in the battle being a quick dodge in the form of a cartwheel. If Terra's Keyblade has a long reach, it can catch Vanitas mid-cartwheel, rendering him vulnerable and allowing Terra to perform a combo. As Vanitas quickens, his preference leans to an even quicker dodge, in which he warps away just as Terra strikes, leaving behind an afterimage only to come down on him from above with an attack of his own. Because this attack cannot dependably be dodged or blocked, the best way to respond is to Slide away after taking the hit and recover Terra's health if necessary. 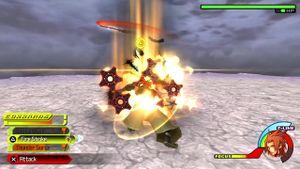 Slide away just as Vanitas makes his approach from underground, or risk the consequences.

When Vanitas surrounds himself with a dark aura while afloat, he enters the second phase of his offense. He adds a fatal move to his arsenal, diving underground and rushing toward Terra (indicated by the dark spot moving along the ground) before coming back up with powerful strike. Getting hit by this move can prove fatal, but fortunately, it is actually easily dodged (though it cannot be blocked). Simply watch for his approach, and as soon as he gets close enough that you feel he might attack at any second, Slide away to avoid it completely. The peskiest element of this move is the inability to attack Vanitas, but as long as you watch for his approach, Terra can survive to dish out a combo afterward. While dodging, make sure to keep an eye on Xehanort, as getting too close to him will result in him dishing out a combo of his own.

Xehanort has incredible speed and strength for a man his age, befitting of a Keyblade Master. After he is attacked once, there is no reprieve, as he will constantly warp to Terra's location only to give the younger Keyblade wielder some payback with a combo that can easily kill him. Even without warping, Xehanort can hurt Terra from across the field with his Dark attack, summoning pillars that surround Terra, or his Blizzard attack, launching three large shards of ice while Terra may be locked in combat with Vanitas. It is for this reason that you should keep Xehanort isolated (while still keeping him in view with camera rotations whenever necessary) until Vanitas is defeated. 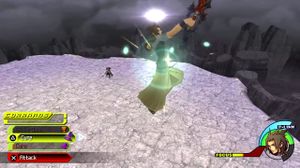 After being launched from the earth, use the opportunity to Air Slide and Cure.

Xehanort will be much more aggressive this time, but Terra does have an advantage in this battle as Vanitas no longer plays a role. As before, Xehanort dodges attacks by warping a short distance away, just enough to be a nuisance. He keeps his combos and Blizzard attacks, but adds some new attacks with which his proximity does not play a factor. Firstly, Xehanort manipulates the earth, causing a good chunk of it to rise up out of the ground right on Terra's position (this is indicated only a second or so beforehand when the ground glows beneath him, making this a tough attack to dodge). This pushes Terra up into the air as well as damaging him, but you can take this time to Air Slide away from Xehanort, distancing yourself from him if healing is necessary. His second attack leaves him somewhat defenseless, but can easily break any combos in the process, as he summons a stream of Keyblades to fly around the field after Terra. Ignore them as best as you can, interrupting your own combos to dodge if you must, but makes sure to deal a good amount of damage to Xehanort around this time. 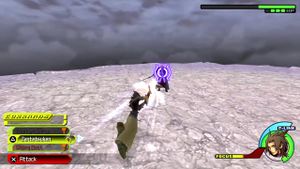 Aside from the attack in which he summons a wave of Keyblades, Xehanort doesn't leave himself open to many of Terra's attacks, and Terra's slow start to normal combos certainly doesn't help matters. As always, take advantage of quick Commands to obtain an opening; once Xehanort is stunned, Terra can finish off his normal combo regardless of its lack of speed. Attacks with great range such as Brutal Blast are also an option, as Xehanort need not be in its direct vicinity, only in its surrounding range, to take a significant hit from it. Lastly, keep in mind that any of Xehanort's combos can be blocked, opening the door for a counterattack, and Shotlock can be used regularly to move this battle along much quicker. After defeating Xehanort, Terra obtains an increase in maximum HP, but no break. Keep in mind that if you choose to give up at this point, you must redo both preceding battles. Watch the scenes for some important context on the next fight, and prepare for the final battle. 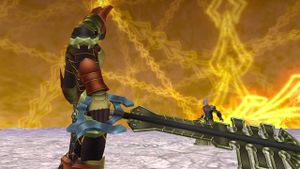 Terra's armor retains his moveset, but so does Xehanort.

This is essentially a battle between Terra's struggling mind and his possessed body, playing out much differently to the battles before it. A Reprisal Command such as Counter Hammer is essential to an easy victory in this battle, as Terra-Xehanort (who shall henceforth be referred to as Terranort) will often perform combos that can be blocked and subsequently countered. This isn't limited to only combos either, as the majority of Terranort's attacks can be blocked. When he attempts to pelt Terra with a stream of Dark bullets, Guard and they will be sent right back to Terranort, hurting him with his own move. When Terranort forms a sudden rock formation out of the ground, block and counter. When Terranort summons massive meteors only to one-by-one send them toward Terra, find a corner and block constantly. There are only a couple of attacks of his that cannot be dodged, the first being his Dark Haze-like charge (which can be dodged easily) and his Dark Impulse combo, which should be familiar as it is Terra's own Command Style. Dodge before he prepares to launch his fist out of the ground on Terra's location, in which case you should use the same strategy used against Vanitas and Slide away as soon as it is about to hit.

With regular use of blocking and Shotlock, victory should come relatively easily. Terranort will add some attacks to his arsenal as his HP lowers, such as a massive laser that can be dodged while it is charged, but is somewhat calm if left at a distance, allowing Terra to heal whenever necessary. Terranort will also heal from time to time, but this should not affect your strategy. Maintain a somewhat aggressive pace with Reprisal attacks and Shotlock, sometimes adding in ranged attacks such as Zantetsuken if Terranort remains stationary for a safe amount of time, and you should be able to defeat him without much difficulty, clearing Terra's story in the process.

You can return to Terra's save at any time if you wish; a post-game save will place him right before the final boss battles. To continue, move on to a new game with Ventus (recommended order) or Aqua.