Terra returns to find Ventus in danger at the hands of his master. Enraged by what seems to be a betrayal, Terra takes action. 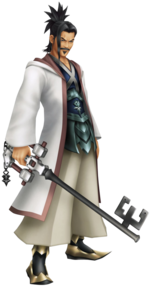 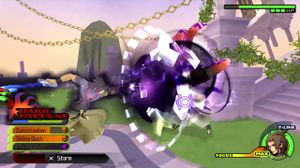 Take advantage of Eraqus' weakness to Darkness with Dark attacks.

As would be expected of the trio's master, Eraqus is an incredibly challenging boss, acting as a precursor of things to come. Fortunately, like most other bosses in the game, this battle becomes much more manageable when you learn his attack patterns. To start off the fight, Terra enters his newly-acquired Dark Impulse Command Style. Though starting off offensively seems reckless, this works in your favor, since Eraqus is actually incredibly weak to the Dark attribute. Keep attacking him until the inevitable happens, interrupting your combo with a combo of his own (you can combat this by beginning to use Guard when you see a whirlwind surround him, indicating the charging of an attack). He can also interrupt any of Terra's combos with an attack reminiscent of the Sliding Dash Command, which he can utilize repeatedly to close the distance between himself and his pupil. When pushed back, any Dark Shotlocks will come in handy, especially if in need of a break. 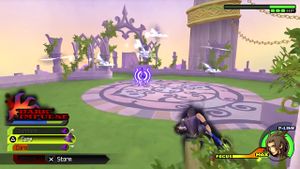 Dodge the blades when they're close enough to making contact to have them miss Terra or simply Guard as soon as they approach.

As far as Eraqus' combat ability goes, his attacks cover all aspects of the field. He can catch Terra in a close-range attack, in which case the Guard and Counter Hammer combination proves useful. He can send Light-based projectiles to chase his student if distanced, which can also be blocked or alternatively, dodged. Variations of these types of attacks, of which Eraqus has access to a great variety, is what makes him so dangerous when combined with his strength. Eraqus can either summon projectiles made up of Light in the form of orbs (sometimes shot as a combo finisher, but can also be shot separately in groups) or blades (which initially surround him as a shield, giving him temporary immunity, before they home in on Terra), both of which can be dodged or blocked. When dodging, make sure to give the projectiles some time to approach, as they will only proceed to home in on Terra after a Slide if he performs it too early. Dodging gives Terra the opportunity to quickly return to his offense, though blocking is much safer and should be practiced for Terra's coming bosses. 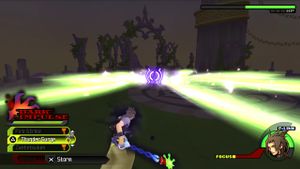 When the sky darkens, prepare to get defensive.

When Eraqus loses two health bars, he introduces new attacks to his regular arsenal in addition to his many other moves. The first of these has him create three massive pillars of flame that converge on Terra's location. These cannot be blocked, giving Terra only two options: Slide or Shotlock. The second of these has him summon the usual blades of Light around him, but instead of throwing them toward Terra, they remain in place and spawn lasers that span the entire field. Dodging through these is risky; while they move relatively slowly, they have a tendency to stop suddenly, adding an element of trickiness to them beyond their proximity. Instead, jump over them, aiming Terra's landings so that he doesn't end up hitting a laser. While the lasers do stop eventually, don't take this as an opening to attack Eraqus unless impatient, as he will warp to Terra's location with surprising speed and begin a combo immediately. Prepare your Guard and look for an opening following one of his normal attacks.

Following the battle is a dramatic scene, after which Terra obtains the Chaos Ripper Keychain and Xehanort's Report 8. You can now enter what was formerly the Badlands, and what is now the location of the final battle: the Keyblade Graveyard.