As soon as Terra lands, he comes across none other than Captain Hook and his first mate, Smee. With misguided good intentions, Terra steps in to defend the pair from an Unversed attack. 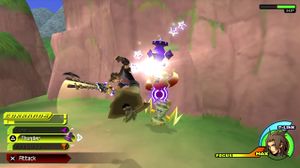 Chase after the Triple Wreckers with aerial attacks.

A couple of new Unversed are introduced in this world, one of them being the Triple Wrecker. These enemies have the appearance of a totem pole because they are actually three Unversed in once, each casting a different form of magic onto Terra. Their ability to utilize three elements (Fire, Blizzard, and Thunder) with great proficiency gives them an edge in both offense and defense. Offense-wise, their attacks tend to be unpredictable, as an attack by the Fire Unversed will result in flames being spewed in Terra's direction, Blizzard results in shards of ice being shot his way, and Thunder results in lightning striking down on his location. Defensively, they boast resistances to the three classes of Magic. Terra has the advantage as long as he maintains an aggressive stance and utilizes physical attacks; because they take some time to cast their spells, they will usually attempt to hop away when in pursuit. Use Terra's quick aerial attacks to catch up to them and separate them from each other, lessening the risk of a sneak attack. 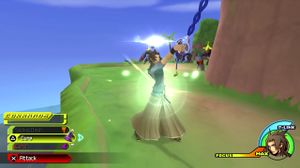 Retreat to a corner of the field to heal and use ranged Commands/Shotlock.

The second new enemy is the Wild Bruiser, an ape-like variation of the original Bruiser. It can charge and create shockwaves just like the original, but adds a rock-based attack to its arsenal, pounding the ground to send underground rock formations Terra's way. Because the arena is on the small side, a group of three put up a tough fight; between the aforementioned rock attack and quick charges that Terra cannot even outrun, he can easily find himself cornered. Retreat to either corner of the field with Slide when necessary, as they will most likely remain in the center, and use ranged attacks to take them down one by one, including Shotlock if Commands are charging. After the battle, Terra is once again fooled by a villain in hopes of finding Vanitas, and obtains a new task: stop the boy that has been disrupting the Captain's protection of his "light." 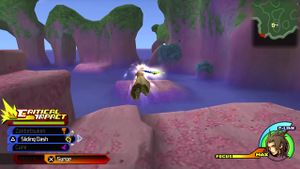 Use Air Slide to reach the islands.

To the left behind the bend is an Abounding Crystal. Continue to the next area to find a save point with a Map nearby. On an island to the right is the Command Shop, and on another island ahead of it is a Hi-Potion. Taking the exit past the save point to the left will lead Terra to the Indian Camp, where he can find some Unversed but not much else (still, the rounds of Unversed that spawn make for some easy grinding) Use the other exit to the right to find the Jungle Clearing. There's only one chest here by the Brush containing a Hi-Potion. The map shows an exit into the tree, but it isn't accessible to Terra at the moment, so continue to Mermaid Lagoon. Be careful when battling Unversed here, as pushing them into water will only cause them to respawn with full health. To the right is an exit to the Seacoast. At the end of this path is an exit to the base of Rainbow Falls. On the piece of land in the center is a chest containing a Megalixir, and at the end of this area is Zero Graviga. Return to Mermaid Lagoon and Air Slide to the islands in the lagoon itself since Terra cannot jump when in water. Swim to an island to the right for an Elixir. A useful Command, Dark Haze, can be found further ahead in a cave. Back on land by the other exit, take note of a high ledge with a chest atop it, which can be accessed via an alternate entrance. Ignore it for now and exit to the Cliff Path. 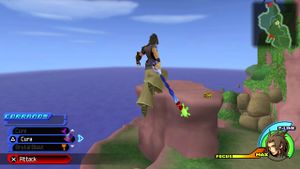 Jump to the platform holding a chest, and from there, jump to the exit in the wall for a special Command.

A fork splits the path in two, with numerous boulders along both. Fortunately, Terra is capable of smashing these boulders. To the right is a Hi-Potion. Continuing along the right path, hop up the ledge and destroy the boulders. After defeating the many Unversed that spawn (including the Spiderchest), destroy some boulders to the left of the Spiderchest. Hidden behind them is Firaga. Next, climb the platform in the center and Air Slide back to another for a Mega-Potion. From here, Air Slide to a tree to the right and enter the hole in the wall; this is the aforementioned alternate entrance to Mermaid Lagoon. The large chest will spawn a Spiderchest if opened, and the small one holds one of Terra's special Commands: Geo Impact. Return and exit to the Cove, where Terra is welcomed by a save point and an Ether. Head to the land to the far side of the area for a Hi-Potion and Examine the boat for a ride to Skull Rock. Follow the path to the left; past the Jellyshades is a Panacea. Return to the fork and enter the cave for a boss battle. 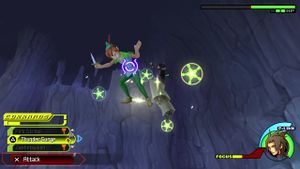 Cancel out Pan's attacks by smacking him out of the air.

For being the local hero, Peter Pan is actually one of the easier boss battles in Terra's story. This is mostly because he doesn't actually attack all too much, and when he does, it is easily avoided. Start by tracking Pan in a combo right away. As a means of defense, he'll fly away, sometimes high out of reach and sometimes low enough to the ground that his evasion tactic doesn't make a difference. At every opportunity, use aerial combos to bring Pan back down to the ground, essentially trapping him again. If he is too far, Shotlock is also an option that he cannot avoid. If he isn't interrupted mid-glide, he will lunge at Terra with a speedy attack. The cue for this can be easily spotted when he comes low and close enough, as he will ordinarily be flying at a leisurely pace. While these factors make this attack an easily-dodged one, it is preferable to cancel out his attack completely by attacking him first. Maintain a consistent offense and the battle should be won easily, earning Terra the Bladecharge Command Style.

After the battle, it becomes clear that Pan wasn't giving his all, but because the misunderstanding is cleared up, Terra will no longer have to fight him. He then obtains a D-link with Peter Pan. Return to the Cavern and defeat the Jellyshades to clear the world, earning you the Pixie Petal Keychain.

Following his visit to Neverland, Terra travels to Destiny Islands and meets some familiar faces. After the scene, he receives the Ends of the Earth Keychain and is directed to the Badlands. You now have the option to continue with the story or revisit Neverland for some chests.

If you've chosen to revisit, follow the left path on Skull Rock again, but this time, jump up a ledge to the right of the chest. Keep climbing up to find a Spiderchest; fight it or ignore it, then proceed inside. Open the chest on this ledge for a Megalixir, then use Air Slide (which should be leveled up highly enough to be used consecutively at this point) twice to reach the ledge on the other side. Open the chests for a Chaos Crystal and one of Terra's special Commands: Ars Solum. You can also take the exit from this ledge for a Sticker. Back at the Jungle Clearing, enter the tree to find Peter's Hideout, which holds a Shimmering Crystal and a Mega Magic Recipe.