After the detour to the Mysterious Tower and the Badlands, Terra is directed by Master Xehanort to a land of light: Radiant Garden. 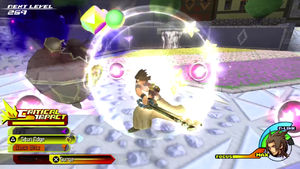 Attack Tank Topplers from behind, or risk sacrificing health and experience.

Before you are given the opportunity to explore, you must defeat a crowd of small Unversed. Blue Sea Salts are introduced to you here, similar in appearance to the Red Hot Chilis but capable of freezing Terra. In the next round, Tank Topplers and a Chrono Twister spawn. Tank Topplers are round balloon-like Unversed that deflate at will, whizzing around with impressive speed and damaging all in their path when doing so, but bouncing around slowly otherwise. Because they are usually so slow, Terra can easily reach their backside and attack them from there, where a valve can be found. Attacking their front will cause them to blow up in size until they reach their breaking point, giving off a red color and rolling around after Terra until they self-destruct. The Chrono Twister is also a tricky enemy, as leaving it unattended for too long gives it the chance to cast Stop on Terra, freezing him in his place and giving it as well as any surrounding Unversed the opportunity to knock him out. Defeat them quickly to avoid any devastating attacks, then search the area for collectibles. A Sticker floats in front of the white gate, reachable with High Jump or by attacking mid-jump. Open chests in the northern and southern corners of the area for a Potion and a Hi-Potion, then exit after Xehanort. 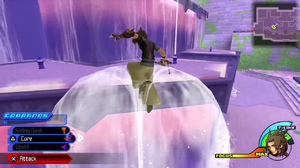 Use the water in the fountain to reach platforms up above.

In Merlin's House, open the chest for a Shimmering Crystal and examine the book for the Hundred Acre Wood Command Board. Exit for a scene, then open the large chest to the left for a Map. Use the Command Shop and save point to the right if needed, then follow after the Unversed into the Fountain Court. On the far end of the area, past some more Unversed, is a Panacea. Use a nearby sprinkler to catapult Terra to higher ground, and do the same for the next two platforms. Thunder Surge and a Fleeting Crystal can be found on a platform to the east, and the exit can be found on a platform to the west. Head through to the next area, which should be pretty straightforward in comparison. Follow the path up to a chest containing Esuna, and Blackout a bit further up to the right. Once finished collecting treasures and fighting Unversed, head left, where you will encounter a couple of new enemies. 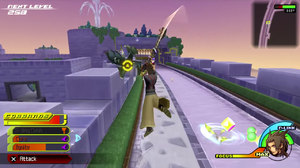 Use aerial combos when the Archravens are within reach, and commands not dependent on location (such as Thunder) when they aren't.

The Archravens are high-flying Unversed that will occasionally swoop in toward Terra in a diving motion. Although they are a bit irritating when they fly out of reach, they don't pose much of a threat. Bring them down to Terra's level with a far-reaching command or Shotlock, then trap them in a combo to deal with them relatively easily. The Mandrakes, despite their unimpressive health, are a bit tougher. They are placed strategically along the narrow Aqueduct so as to catch Terra with projectiles before he can reach them. Dodge to the higher ground to the side or jump over their attacks to get close enough so that they are rendered defenseless. Alternatively, attack back with projectiles of your own. A chest hidden between some bushes to the left contains a Hi-Potion. Head to the end of the path and through the exit to the next area, but only if you're ready for a boss fight. Make sure to have Cure in your deck before proceeding. 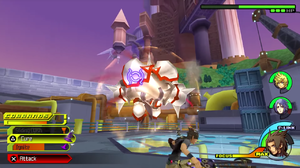 When it still has both arms, it will often attack by charging.

Trinity Armor can be considered the game's first truly tough boss due to its power and sheer size. Fortunately, Terra fights this battle alongside his close friends, Ventus and Aqua, who can certainly hold their own against the Unversed. Like the Guard Armor of the first game, Trinity Armor is made up of multiple parts, each with their own health gauges and unique attacks. Focus on attacking the arms or legs first, as the body has the most health and will take the most time to get through, and taking out its limbs will limit the variety in its attacks. With its arms, it guards its body and charges at Terra, an attack that he can Slide away from. With its body, it can create a massive laser that it sends around the arena by turning; Slide into this to dodge through it, or Slide away if you feel you can create a comfortable distance in time. 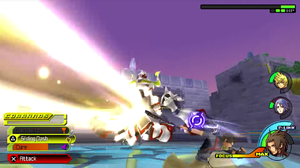 Slide into its laser to dodge right through it.

When the Armor splits, it is at its most vulnerable, but also its most dangerous. Attack a body part far away from the others, but watch for any cues. If the head takes center stage and starts spinning, it will pelt out bullets in all directions. Guard regularly, as this attack can be fatal if Terra gets caught in it. If all parts start spinning, they will slide across the arena aimlessly and damage anything in their path. This is another attack that can prove fatal if not avoided properly, and because Terra's Slide isn't as effective as Aqua's or Ven's, dodging isn't the best way to go about it. The safest approach is to find a wall and stand against it so that Terra's back isn't exposed to any flying parts. Watch them closely and Guard as they approach until the attack is concluded. When only two parts remain, the Trinity Armor will form a laser between them and attempt to trap Terra within it. This can also be dodged by executing a Slide into it, but you should instead focus on attacking here by hitting the parts' exposed backs. When only the body remains, it will spew balls of magma in all directions. This can also be dodged with Slide, but at this point, you should focus on finishing it off. Do so for the Rockbreaker Command Style and a scene, as well as a lifetime pass to Disney Town.

After another scene, exit to the Fountain Court. From here, head through Castle Town back to Central Square. Find the below-ground entrance to the Entryway, where you'll find a save point and an exit to the Outer Gardens. Once there, fight the many Unversed that spawn and pick up the two chests in the area; one in a corner to the left containing a Pulsing Crystal, and the other to the right of the far end containing Fira. There's another Sticker by the gate to the back, but it can only be reached with High Jump. Once again, prepare for a boss fight before entering the passage in the center. 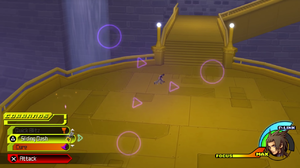 Avoid the target of Braig's gun with constant dodging.

The battle starts with a sequence reminiscent of the battle against Braig's Nobody, Xigbar, in Kingdom Hearts II. The arena is viewed from Braig's perspective, and Terra is left with no option but to dodge. Slide away from the reticle to avoid bullets, and don't risk slowing down, as he will sometimes shoot multiple bullets at a time. Once he's finished, he will warp to the arena, and the real battle will begin. 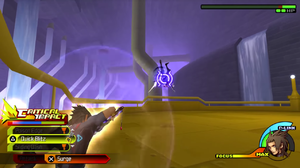 Guarding is an effective defense against Braig.

Braig attacks only by shooting, usually a few bullets at a time but sometimes more. Guarding is the safest way to avoid getting hit by these bullets, and if Terra is close enough, he can use Counter Hammer afterward to deal some damage in a safe manner. Otherwise, he is best attacked between rounds of shooting, either as soon as he warps or right before he does. He will sometimes warp so that he shoots from a 180° angle, but this shouldn't affect your strategy. However, once he's upright again, he will usually proceed with one of his most dangerous attacks, shooting continuously while he circles Terra; if this attack is not blocked or dodged, it can easily knock him out. He also has a unique attack in which he charges a massive bullet (he can be attacked, but not stunned in this state); the bullet itself doesn't actually do enough damage and can easily be blocked or dodged. If there is a crux to Braig's battle style, it's the length of time his attacks take to land. As long as you utilize Terra's defenses properly, he should be defeated easily. After the scene, you receive Xehanort's Report 2 and the Dark Volley Shotlock.

Return to Radiant Garden to pick up some treasures in the Purification Facility, specifically a Mega-Potion and Chaos Crystal. This area can be found past the Outer Gardens, in the same place where Terra fought Braig.