As soon as Ventus lands, he will encounter the mysterious Vanitas. After the scene, prepare for a boss fight. 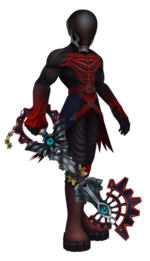 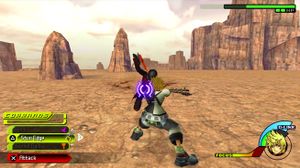 Blocking is incredibly important in dealing with the game's quicker opponents.

If you've played Terra's story before, this fight should be familiar. Vanitas retains the same moveset throughout all three stories, which includes quick physical combos and powerful magic attacks such as a Fire ball that splits before homing in on its target and spread Thunder bolts following a jump. Vanitas is also quick on the defensive, frequently warping before Ventus' hits can land only to launch an attack of his own from the air. In this case, interrupt your own combo to Dodge Roll out of the way; while this pesky counterattack doesn't hurt so much on its own, the damage adds up when Vanitas decides to string a combo. Strike Raid should come in handy here despite its lack of speed, as it can stun Vanitas for a good amount of time. Attacking after blocking an attack of his is also a good strategy, as the momentary lapse in offense will leave him open to a combo. 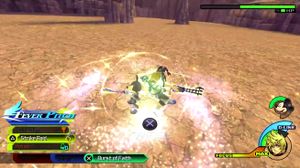 Team with Mickey when prompted for an inescapable special attack.

Regardless of how you're doing, the battle will be interrupted by a scene in which Ventus is knocked back and Mickey arrives to assist him. Though he isn't actually capable of doing much damage on his own, Mickey's fighting style is very frenetic and fast-paced, counterbalancing Vanitas' meticulous quickness with flips and wide swings of his Star Seeker. The agile mouse serves as a sufficient distraction to Vanitas if Ventus keeps his distance, allowing Ventus the opportunity to heal and land ranged attacks (such as Magic projectiles, Strike Raid, and Shotlock). A new attack also becomes available with the aid of Mickey. When prompted, press

to begin the Burst of Faith attack, in which Ventus and Mickey take on a back-to-back stance to cover all ground between them and shoot Light in all directions. Press

repeatedly to keep the attack going; Vanitas may try to dodge with warps and flips, but the pair's invincibility combined with the attack's range gives him no margin for escape. The decent amount of damage that Mickey can deal combined with his ability to sufficiently distract Vanitas and the Burst of Faith attack makes him a great asset in the second phase of the battle.

Defeat Vanitas to gain an extra slot in the Command Deck, High Jump, and a D-Link with Mickey. If you've already done all revisits, head to Radiant Garden for a long-awaited reunion.