Upon landing in the world, Ventus finds that he's as tiny as a mouse, giving him access to a unique part of the world: Cinderella's house. 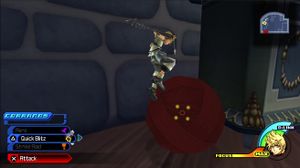 Ventus can interact with certain objects to reach higher ground.

Defeat the Unversed that spawn and climb up the ledges for a Potion. Climb up another set of ledges to find another mouse hole, leading to Cinderella's Room. After the scene, Jaq will instruct Ventus to find the materials required to make Cinderella a dress for the ball: a white sash, white lace, a white button, pink fabric, and pink thread. Open the chest next to Jaq for a Map and climb the chair to a vanity for a Sticker. Find the ball of yarn and hop on, then roll it to a nearby table holding a candle and a chest; hop off of the yarn for a boost, allowing Ventus to reach the chest for a Magic Recipe. Roll the yarn to the other end of the room by Cinderella's bed, using it to reach her endtable for a new Command: Stun Edge. Return to the Mousehole, and from here return to where you started: the Wardrobe Room. 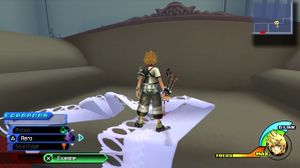 The white lace, pink fabric, and white sash can be found on the ground level of the Wardrobe Room.

As in Cinderella's Room, use the ball of yarn to access ledges that are otherwise out of Ventus's reach. There are many Unversed in this room, making it a good place to grind, though keep in mind that the ball of yarn can easily trample them if you find yourself struggling. To the right atop the sofa is white lace and on the floor across from it is pink fabric. Underneath the table in the corner is Blizzard. Use the yarn to reach the white sash on top of a stack of boxes to the left, and use it again to reach a table further left in the corner for a Balloon Letter. Roll the ball of yarn to the other side of the room to reach a Fleeting Crystal atop another pile of boxes, then exit through a Mousehole on the wall opposite the other one. 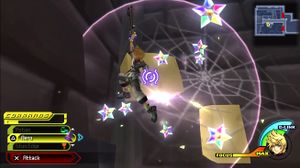 Use the matchbox to reach the cheese, which Ventus can then whack out of the web.

On the left side of the ledge is a Potion and on the right is a fork stuck in the wall. Hop on the handle to launch Ventus up to the rafters. Use another fork to jump even higher, then hit the matchbox to push it into the other side of the wall, acting as a ledge to the spiderweb. Hit the web until both slabs of cheese are freed, then drop down to the lower level. Use the cheese to reach a Pulsing Crystal and another mousehole, acting as an alternate entrance to the Wardrobe Room. Here you can pick up one of the final materials needed for Cinderella's dress, the white button; only one more to go. Return to the Mousehole and again use the fork to reach the rafters (but look behind the wall the fork is stuck in first for a Hungry Crystal). Return to the other side of the area and follow the beam across the room to the right, where you should find more Unversed and a ball of yarn. Ignore it and drop down for an Ether. Equip Sliding Dash if not already in your deck and use it in the air by the back wall (where you should see another mousehole leading to the Wardrobe Room) to reach a beam on the other side holding Thunderstorm. Falling from here will put you back at the initial Mousehole, so if you'd rather not risk having to start the journey over, wait to revisit until Ventus receives Air Slide. Otherwise, use an aerial Sliding Dash to return to the platform and exit to the Wardrobe Room. Walk out on the ruler and climb the books to find Zero Gravity, then collect the final material in front of them, pink thread.

Once all materials are collected, Ventus will speak to Jaq, who instructs him to find one more material: a pearl. Return to the Wardrobe Room for a boss fight. 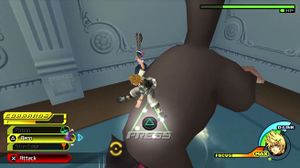 Attack Lucifer after a failed pounce to trigger a rodeo attack.

Fittingly, Ventus fights the antagonist of the mice in Cinderella, Lucifer the cat. Lucifer's attacks are typical of a cat, primarily consisting of clawing and pouncing. Fortunately, he also isn't the brightest, giving Ventus a couple of easy opportunities to attack. Lucifer can be stunned with consecutive attacks, or even stun himself by running into the wall, indicated by the stars floating around his head. Lock on to his head and use aerial attacks to reach it. The second opportunity comes when falls flat on his stomach after pouncing, missing Ventus. Attack him for a

prompt and Ventus will ride on the cat's back, triggering a QTE. Press all buttons shown to successfully complete the attack, stunning him. Between this attack and Shotlock, Lucifer should be defeated fairly easily.

Defeat the cat to learn the Blizzard-based Diamond Dust Command Style and obtain the pearl to clear the world, in turn forging a D-Link with Cinderella and obtaining the Stroke of Midnight Keyblade.