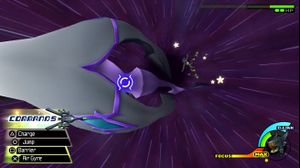 Ventus can swing his Glider to attack the Unversed.

As in Terra's story, the Deep Space introductory fight is done on a Keyblade Glider. Press

for a charging attack,

for another attack in which Ventus swings his Glider into the enemy, and

for a Barrier that blocks attacks from all sides. Ventus is pitted against the Metamorphosis, a large jellyfish-like Unversed that attacks by spearing its head in a charge and swinging its tentacles around. Use Barrier whenever it prepares one of these attacks and lock on to the Unversed to attack it at every other opportunity. Defeating it here isn't necessary; just do enough damage and survive against it to trigger a scene, and Ventus will find himself inside the ship and on foot again. 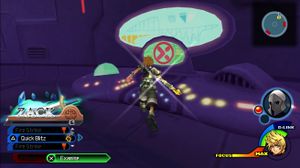 Examine the machine only after collecting the treasure on the ground floor.

Go through the door behind Ventus to find an Abounding Crystal in the center of the area, then return to the Ship Corridor and open the two chests here for a Pulsing Crystal and a Hi-Potion. Continue forward down the hall to trigger a fight with some Unversed. Defeat them all to open the door to the next part of the hall, where chests containing a Mega-Ether and a Hi-Potion can be found. Continue to the next area and Ventus will be locked in with Unversed, and he must again fight his way out. Doing so triggers another scene. Afterward, open the chest in the Control Room for a Map before entering the next area, where the gravity may be modified via machines stationed on the ground and middle floors. Drop down to the ground floor for Zero Gravira and then Examine the machine to reach Thundara on the third floor, then examine the machine on the fourth floor for Pulse Bomb. Examine the machine one last time to reach the fifth and final floor, where a Sticker can be seen in the center of the room and an exit to the Launch Deck can be used.

Open a chest as soon as you enter for a Mega Attack Recipe, and Glide across to the platform on the other side of the room (or wait until the machine is activated if Glide is unavailable) for Xehanort Report 1. Pick up Fire Surge and a Fleeting Crystal on the ground, then climb up the blocks to reach the exit to Machinery Bay Access. Pick up the Mega-Potion here before continuing forward to the boss fight. 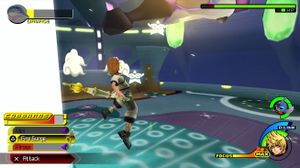 The best time to attack Metamorphosis is when it is attacking the ship.

This battle is fought with Stitch, so D-Links cannot be used. A gauge in the corner represents damage taken by the ship. This must be maintained as well as Ventus' HP, though its attacks on the ship are in a phase of the battle separate from its normal attacks. When it attacks Ventus and 626, it charges around the room and rains Thunder down on them. Use Dodge Roll and Shotlock whenever possible, as Guard will not do much good here. Occasionally, it will attempt to camouflage itself, though its form is still easily visible and can easily be targeted. Ventus is also capable of performing a team attack with 626, Astro Strike, as he will throw the alien when the

prompt is followed. When Metamorphosis latches onto the tube in the center of the room, the damage taken by the ship will steadily increase. Hit it to interrupt its attack as well as do some easy damage; if you do not reach it in time, it will simply halt its own attack after a while. When enough damage is done, Metamorphosis will begin to complicate this phase by latching onto the tube on the second level of the area. Activate the machine to turn off the gravity, allowing Ventus to reach the Unversed with only a jump.

Return to the save point in Machinery Bay Access, and from here enter the Machinery Bay, where Metamorphosis was fought. On the second level of this area is a Chaos Crystal (to the left) and Mine Shield (in the center).