Ventus lands to find a sleeping Aurora. Perhaps Terra would know something about that... 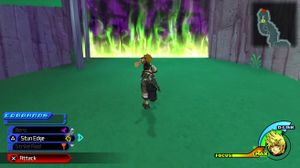 With the help of the fairies, Ventus can clear a path to Maleficent's Castle.

Enter the Tower Room for Sleep, then exit to the Hallway. At the end of this hallway is a Hi-Potion. Follow the path to the right and exit to the Audience Chamber. To the left of the thrones is Thunder and to the left of the exit is a Hi-Potion. Exit to the Bridge and then to the Forest Clearing. To the right is a Map and to the left is a save point. Continue forward to the Waterside. Atop some ledges along the path is a Potion. Approach the wall of green flames to trigger a scene in which Fauna clears them out, sending Ventus to the Forbidden Mountain. Open a chest to the left for an Ether and follow the winding path to Maleficent's Castle. 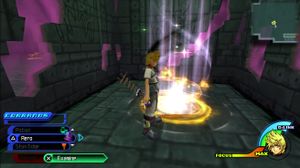 Now that you've made it inside, take out her unimpressive guards, some spearmen and some archers, as you move along the path. In a chest to the left of a set of stairs is Cure. Take the stairs up for a scene, and take out the many guards that come rushing in afterward. Once that's done, open a chest to the side of the room for a Hi-Potion and exit to the Hall. This room contains a great number of warps, separated by walls that rise out of the ground when approached. Take the blue warp and then the orange along the linear path to find an exit to the Dungeon. Use Sliding Dash to get across a large gap on the left side of the room for Tornado Strike, then return and jump across the gap on the right side of the room. Open the chest for a Fleeting Crystal, making sure not to fall to the ground below. Exit to an alternate area of the Hall from this ledge, and open the chest nearby for a Hi-Potion. Let the walls lead you to the green warp. From here, open a chest to the right for a Hungry Crystal and one to the left for a Wellspring Crystal, then take the green warp back to the Dungeon. You can now drop down into the center of the room.

Take the stairs up to another alternate entrance of the Hall. This warp changes color; the purple takes you to Magnet and a Sticker, the yellow takes you to a red warp. Take the red warp to trigger a scene. Take the exit to Maleficent's Throne for a boss fight. 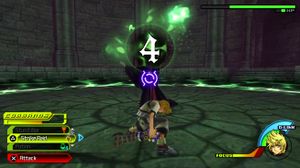 Failure to reach the fairies in time will allow Maleficent to stun Ventus.

Make sure to have the newly-acquired Cure equipped when going into this one. Maleficent can cast Thunder from her staff in Ventus's direction that can be avoided with a well-timed Dodge Roll, which can also be used to advance toward her and start an offense. When she transforms into a sort of black hole, make sure to follow her closely so as to catch her when her attack finishes, since she will be dizzy for a short time. When Maleficent warps to the center of the room, find the fairies and press

to begin a QTE; press the face buttons in a counter-clockwise motion in time with the orb that passes through them to perform a powerful attack that stuns her. Failure to do so will leave you only with the option to Dodge Roll through the flames, as attempting to attack her normally will only result in being stunned. When the room goes dark and she warps to the highest point, she will be preparing a Thunder attack, striking down bolts of lightning wherever Ventus stands. Dodge Roll to her position and attack her while you can, as any attacks close by her will usually miss.

Defeat Maleficent for the Thunderbolt Command Style and a short-lived reunion with Aqua. After the scene, Ventus obtains the Fairy Stars Keyblade and is then directed to the Badlands.

Return to the Gates of Maleficent's Castle; you can now access higher ground. Head left for the Absolute Zero Shotlock and forward, continuing up the winding stairs, for a Wellspring Crystal and a Balloon Letter. Further ahead is another newly-accessible ledge holding a Soothing Crystal.