Ventus wakes up on the Seacoast of Neverland, where he meets the Lost Boys and Tinker Bell. They inform him of a shooting star by the Indian Camp, and upon hearing this, an excited Ven agrees to follow them.

Search for the shooting star[edit] 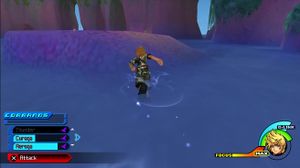 Most treasures in Mermaid Lagoon are reachable simply by swimming.

In a nook to the left is a Panacea, and right by here is an exit. Take it to find Rainbow Falls: Base, where Ventus can pick up a Sticker and a Megalixir, then return to the Seacoast. To the right of this area is a Hi-Potion and another exit, this one leading to Mermaid Lagoon. Use Air Slide (or Superglide) from the highest platform to reach the Sticker. The chests out on the water contain an Elixir (in plain sight) and Aeroga (within a cave), both reachable by simply swimming to them. There's one more chest in this area, though the ledge is too high reachable only via an alternate entrance. Ignore it for now and continue forward along the path, away from the water. Ventus should now find himself in the Jungle Clearing, where he meets Peter Pan. 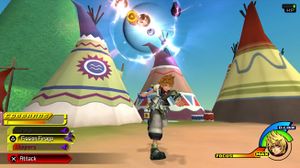 Magnet is a handy Command to have for the coming battles.

Open the chest by the bushes here for a Balloon Letter, then enter the tree in the center to find Peter's Hideout. Here Ventus can use the save point and Command Shop as well as open a couple of chests in an alcove for a Fleeting Crystal and a Mega-Ether. Exit Peter's Hideout and then exit to the Gully to find an Abounding Crystal, a Map, and another save point. From here, Ven can finally enter the Indian Camp and solve the mystery of the shooting star, though it comes at a cost. Ventus must defeat all Unversed in the area before he can move on after Captain Hook and Tinker Bell. Equip some Commands that are effective against crowds, such as Magnet and Aero, to better deal with the tough Unversed. Mandrakes can especially prove to be a nuisance due to their ability to launch projectiles from a great distance. Fortunately, Ventus can close the gap between him and them relatively quickly, and as long as he pushes one of them toward the others with a steady offense, he can destroy them all together with Commands such as Stop, Shotlock, or even a Command Style. Once all Unversed are taken care of, Ventus can commence the chase. 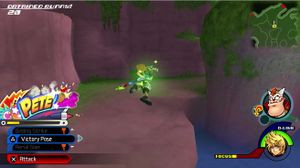 Another exit from Mermaid Lagoon can be found by Air Sliding or Gliding across the water.

After the scene, you have the option of returning to the Indian Camp for an extra Command. Ventus can use the trampoline at the center of camp to reach the top of the totem pole here, and then smack it with the Keyblade for Thundaga, though this isn't necessary for any completion goals. Otherwise, since there are no chests here, you can return to the Gully and backtrack to the Jungle Clearing, and further to Mermaid Lagoon for a scene. Ventus can now use Glide, which if he has not acquired Superglide by this point, is an incredibly valuable Command to have. Use Glide or Air Slide to reach the high platform in the center of the lagoon, and then again to reach another ledge. Exit from here to the Cliff Path and take the road to the right for a Hi-Potion. Just as in the other stories, all boulders can be destroyed with attacks here. As a matter of fact, Treasure Raid hides behind a set of boulders against a wall at the top of the path. For the last treasure here, climb the platform in the center and Air Slide/Glide to the other across from it for Firaga, then Air Slide/Glide to an alternate exit in the wall, which takes Ven to a previously unreachable ledge of Mermaid Lagoon. Open the chest here for Blitz, then return to the Cliff Path.

Exit to the Cove for a save point and an Ether. Walk a bit further to trigger a scene and a boss fight. 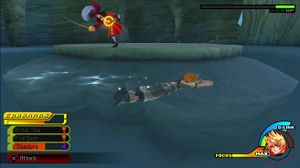 Lure Hook to the island's edge; once he begins to teeter, hit him right into the crocodile's clutches.

Hook is a unique boss, but this also makes him relatively easy to deal with. His "gimmick" is his fear of the water, in particular what lurks within it: the crocodile. Because this battle is fought on an island, Ventus can easily exploit this weakness by pushing Hook toward the edge with constant attacks. If successful, Hook will find himself in a vulnerable state, teetering on the edge of the island in a desperate attempt to stay dry. Only a few more hits in quick succession will knock Hook into the water, where the crocodile will do a great deal of damage to the pirate before he finds his way back onto the island. Be careful to avoid the water yourself, as the crocodile can also do damage to Ventus if he somehow finds himself knocked within its reach.

Hook's attacks are pretty standard for the pirate if you have experience fighting him in some of the other games; he performs quick jabs and slashes with his sword and tosses bombs disguised as gifts. The former can be blocked with Guard and followed up with Counter Rush, while the latter can be avoided with Dodge Roll. An easy way to stun the pirate is with Fire attacks, as he will hop around for a bit in an attempt to remove the flame. Defeat Hook to forge a D-Link with Peter Pan and obtain the Pixie Petal Keyblade.

Return to the Cove where Captain Hook was fought and open the two chests on the other end of the area for a Megalixir and a Mega-Potion.

A chest to the left of the entrance to the tower holds a Wellspring Crystal and one to the right holds a Chaos Crystal. At the other end of the area is a Sticker and Magnega. Enter the tower to find a Mega Magic Recipe and head up the stairs for a scene, after which Ventus forges D-Links with Donald and Goofy. Visit the Badlands for a scene and then the Land of Departure for more scenes, after which Ventus obtains the Lost Memory Keyblade and Xehanort's Report 9.