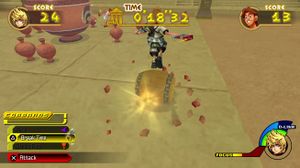 In training, use a barrel whenever it spawns to rack up points quickly.

Defeat the rounds of Unversed that spawn with the help of Hercules and Zack to gain access to the Coliseum Gates, where most of the world's treasures are located. To the left of the entrance is a Sticker and a Mega-Potion, Cura is to the left of the exit behind the columns, and Fire Strike is to the right by the statue. Enter the Vestibule to find the Map, then speak to Hercules to begin training. This consists of simply breaking urns, where destroying each urn gets Ventus a point and destroying larger ones gets him multiple. Hit a barrel once to knock it over, and once it begins rolling, hop on to destroy all urns in Ventus' path, even larger ones, with one hit. Speak to Hercules again for a second round of training, in which Ventus must now earn more points than Hercules within the time limit. This should be accomplished easily as long as you make use of the barrels. 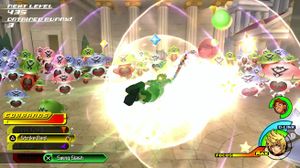 Use Ventus and Hercules' Swing Slash combination attack to deal a great amount of damage with invulnerability.

After the scenes, exit to the Coliseum Gates and then again to the Town Near Thebes for the final battle against a massive group of Jellyshades. Before the battle begins, Hercules joins to assist Ventus; you cannot use D-Links while fighting in the party, but all other attacks are available to you. Ventus also gains access to a new combination attack with Hercules; press

when prompted and Hercules will begin to swing Ventus around by the legs, hitting all surrounding enemies with the Keyblade. Move

in a circular motion to keep the move going until Hercules is ready for the finisher, indicated by an

prompt. Hercules then tosses Ventus a great distance, and Ventus hits all Unversed in his path. If you ever find yourself struggling, this move should prove useful.

Clear the battle for Air Slide (which should be useless if you've already acquired Superglide in Disney Town) and a scene, after which Ventus forges a D-Link with Zack and obtains the Mark of a Hero Keyblade.