Upon landing, Ventus spots Mickey and decides to put his search for Terra on hold to follow the mouse. Unbeknownst to him, a large Unversed lurks around the corner to intercept any potential reunions. 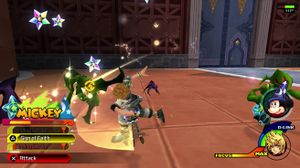 Return to the Front Doors after getting kicked out for some more grinding and treasure.

To the right is an Ether and to the left is a Potion. Take the exit north from here to the Gardens. A chest to the left of this area holds a Hi-Potion. The groups of Unversed that spawn here can put up a tough fight, especially when close together, but these battles are ultimately a good source of experience. Head up the ramp to find some more Unversed of the same variety. Right next to the long staircase to the left is a Wellspring Crystal and up the stairs is a Sticker, now accessible with High Jump. To the right, in a corner past the Unversed, is Binding Strike. Climb the steps and make a left turn for Slow before walking through the gate to the next area. In this next area is a save point, a Hi-Potion, and another set of steps, which can be climbed for a scene featuring some familiar faces from Kingdom Hearts II, albeit in different forms. Afterward, climb back up the steps to fight some Unversed and pick up Freeze Raid to the left (the Sticker here can only be reached with a maxed High Jump). 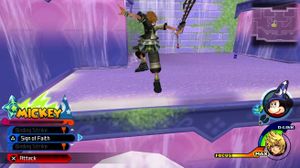 As in Terra's story, use the fountains to propel Ventus to higher ground.

Return to the Gardens and then the Central Square to meet Scrooge McDuck and obtain a Disney Town Pass. Follow the Unversed straight ahead to the next area to meet Merlin; open the chest for a Map and enter his house for a new Command Board (after examining the book) and a Block Recipe (in a chest by the door). Exit and continue forward to the Fountain Court, where Ventus can be launched to higher levels of the area by jumping in the upward path of the water jets. On the third platform, only the jet on the left is operating, but there's a chest on the platform to the right; drop off from here onto a more powerful jet placed on the second platform on the right Counter Rush. Additionally, a Sticker can be reached from his platform with High Jump and a well-timed strike, or an aerial Sliding Dash. Once finished here, follow the highest platforms to the left to find an exit. Follow the path and open a chest at the end of it for a Panacea, then make a turn onto the ramp and into a watery path. Open a chest to the right for Fira before following the path to the left, opening a chest between some bushes for a Hi-Potion along the way. Exit the area for what should be a familiar boss battle. 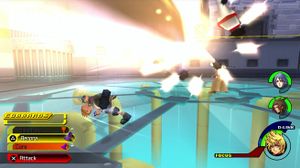 Dodge Roll is an effective defense.

If following the recommended order, this boss should be familiar as the exact same one fought in Terra's story due to the converging paths of the trio. It doesn't differ all too much in that the Trinity Armor has the same attacks and Ventus has Terra and Aqua to assist him, though they shouldn't be relied upon as they mostly do their own thing and will most likely be knocked out at some point. Also as before, all parts of the armor must be defeated, with a successful defeat earning Ventus some HP if needed. Make use of projectile attacks received from chests such as Fira and Freeze Raid, as they deal a great amount of damage to the boss as well as allowing Ventus to enter a powerful Command Style such as Firestorm or Diamond Dust. Tornado Strike can also prove useful due to the continuous damage it deals, though be wary if using it as it is easily interrupted. Refrain from the use of Reprisal Commands, as blocking the Armor's attacks will do nothing to stun it; your best defense here is to Dodge Roll.

Clearing the battle earns Ventus the Cyclone Command Style, which can be entered via the use of Aero, Strike, Raid, and Tornado Commands in any other Command Style. 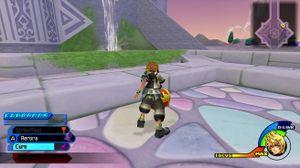 Open the world's final chests in the Outer Gardens after the scene.

After the trio splits, Ventus finds himself in the Aqueduct. Backtrack to Fountain Court, then to Castle Town, and finally to Central Square to meet Ienzo. Ventus is thrust into a battle with some Unversed to protect the boy; make sure to have Commands effective against crowds at the ready such as Aero, Magnet, Zero Gravity, and most powerful of all, Tornado Strike. After the battle, Ventus obtains Reversal and a tip from Even, who points him to an underground area of Central Square. Head straight and jump down to find an exit to another area, where you'll find a save point and yet another exit to the Outer Gardens. After the scene, turn back around and open a chest to the right for a Pulsing Crystal and one to the left for a Soothing Crystal before exiting. There are also some Unversed to fight here, which shouldn't prove much of a challenge after the last battle. Return to the Entryway and then to Central Square for some scenes after which Ventus obtains the Frolic Flame Keyblade and access to new worlds.