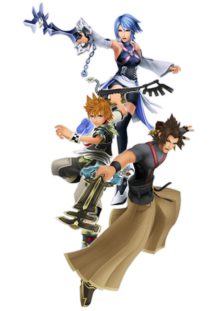 Kingdom Hearts: Birth by Sleep follows the same structure as other games in the series: travel to various Disney worlds and battle numerous enemies along the way. However, this game differs in that the story is split into three unique perspectives. Terra, Ventus, and Aqua are the game's playable characters, all wielding Keyblades but utilizing different battle styles. Though they were all constructed to be balanced based on advantages and disadvantages, Terra is the most difficult character to use. He is slow, but seemingly makes up for it with greater power than the other two Keyblade wielders. However, this actually doesn't make much of a difference in late-game stages, as Aqua and Ventus are able to make up what little difference there is by leveling. This leaves Terra with severe disadvantages in the form of a dodge with less invincibility frames and a Guard that only blocks his front. On the other hand, Ventus and Aqua are much quicker, and Aqua possesses Barrier, which blocks all attacks against her regardless of direction. Finally, each character boasts a specialty in battle: Terra has exclusive Dark attacks, Ventus has exclusive Light attacks, and Aqua has exclusive Magic attacks. 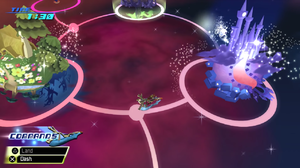 Terra, Ventus, and Aqua use Keyblade Gliders to travel to different worlds.

This game also has a unique method of travel between worlds; rather than traveling with the Gummi Ship in a shoot 'em up mini-game (or simply selecting worlds in a menu), the trio is able to summon Keyblade Armor and a Glider unique to them with their respective Keyblades. This is essentially a hassle-free way of traveling between worlds, as you can follow the lanes connected between worlds or go off the map to travel to a world of your choosing.

While previous games had the player battle Heartless and/or Nobodies, Birth by Sleep introduces the Unversed, borne out of negative emotions. Nevertheless, they play the same role as Heartless and Nobodies, varying in shapes and sizes and making appearances in all worlds. Though Terra's walkthrough will go in most depth on these enemies, as well as any bosses that appear in other routes, a primer on all Unversed can be found here. This guide begins with Terra's story, following the order recommended by series creator Tetsuya Nomura (with Ventus following, and Aqua closing). Though following this order isn't necessary, keep in mind that the guide is written with this order in mind in order to avoid repetition. Regardless, all chest locations and unique bosses will be detailed in the individual characters' walkthroughs.