Chain of Memories is quite different from other games in the Kingdom Hearts series due mostly to its card-based battle system. Instead of having a list of commands, the player has a card reel. The selected card (like the selected command) is used as the attack. Unlike commands, cards have to recharge. Playing as Sora in Sora's Story differs from playing as Riku in Reverse Rebirth. Though it's not too much to adapt to after playing the another's story path, there are some major changes (Riku can't use any Magic cards, Sora doesn't have Dark Points, Riku doesn't have any friend cards other than King Mickey, Sora can't switch into a more powerful form during battle, etc.). 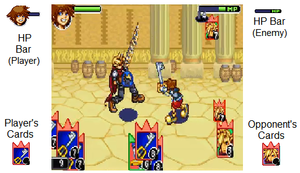 When you see Heartless roaming around the area, it's a sign that it's battle time. Like Final Fantasy, battles are entered when the enemies are walked into. This is unlike other Kingdom Hearts games, where battles were entered simply when the player character would walk in range of a Heartless. Walking into one Heartless initiates a battle with many Heartless. Sometimes cards are earned after finishing battles, like Map Cards and Enemy Cards. Map Cards allow you to go to other rooms on the floor's map. Additionally, battles are the best way to earn experience, allowing you to level up and face tougher bosses. The screen setup is as follows:

Cards are the most vital part of the battle system of Chain of Memories. Form decks in rooms when you're not in a battle by using the menu. The more cards you have, the less you'll have to reload your deck during battle. There are four types of basic cards that can be used:

Though Attack Cards, Magic Cards, Summon Cards, and Item Cards are the main cards to use in battle, other useful cards can be obtained as well. These card types are:

Card values are usually displayed by the number in the bottom-left corner of the card. These are important when trying to break the enemy's cards. If the number on your card is higher, you'll be able to break your enemy's card and your attack will follow-through. Press

when a card is on top of your deck to stock it. Stock three cards to make a Sleight. Sleights are combinations of cards that increase the power of the original cards.