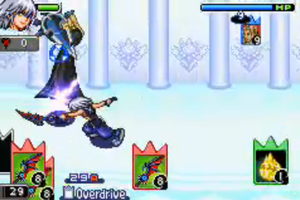 Get behind Vexen before you attack.

When Riku arrives back from Monstro to Castle Oblivion, he meets a member of Organization XIII: Vexen. After a conversation, Riku challenges Vexen to a battle. It's time for the first boss fight against a member of the Organization. Vexen's attacks are largely ice-based and can do a considerable amount of damage. Attacking him from behind and when he's reloading his deck is the best method. There really isn't much to it other than that. If you happen to tap into Dark Mode, use Dark Firaga and Dark Aura. These moves will come quite handy in this battle. Vexen's attacks include:

Once you've defeated Vexen, you'll learn that the battle was just a trap so Vexen could get date to create a Riku Replica, as seen in Sora's Story. Vexen escapes and now it's off to Never Land. 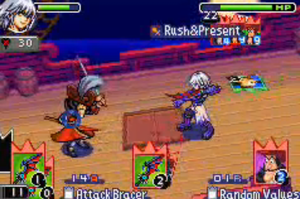 Dark Mode can prove useful in this battle.

From where you start, clear the room of Heartless and strike the door. Synthesize using a card with a value of 1 or more. In Room 2, use a card with a blue border and the Key of Beginnings. Here you'll face Captain Hook. If you have the chance to get into Dark Mode, use Dark Aura. Hook only has one health bar, so this should finish him off quite quickly. If you can't, this boss battle isn't any harder than the ones you've faced earlier. Keep chaining combos and card breaking. Hook will be finished eventually. Hook's attacks, although non-fatal, can prove to be quite a nuisance. These include: