The world will start off with Goofy pointing out that someone is in trouble. As it turns out, it's Aladdin, trying to fend off a group of Heartless. Donald encourages the trio to help out, and the battle begins. You'll be battling four Bandits and a Green Requiem. When the battle is over, more Heartless will appear. When the battle seems never-ending, Aladdin will break out his lamp and summon the Genie. His first wish - get rid of the heartless - will have Genie wipe out the group for you. Genie explains that Aladdin has two wishes left and then disappears.

After a cutscene where Aladdin promises the Genie that he'll use his third wish to set him free, the five move on to their road to the palace. They are then stopped when they see a group of Heartless surrounding Jasmine. Aladdin wishes them away and off goes his second wish. When more appear, Aladdin gets ready to use his third wish when Sora stops him, reminding him of his promise. The battle begins. Battle the two Shadows, the three Bandits, and the Fat Bandit to reach the next cutscene. Jafar will take the lamp away from Aladdin and take away Jasmine with the help of the Genie.

After Sora, Donald, Goofy, and Aladdin make Jafar use his second wish, Jafar decides to use the third one to turn himself into a genie. The boss battle for Agrabah then begins. 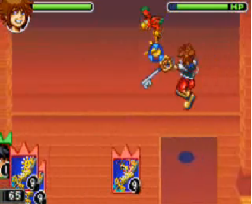 Focus on the bird!

Genie Jafar is invincible, and any damage you give him will be useless. In the end, he'll have the same amount of HP as he started out with. In an event mimicking the boss battle of Kingdom Hearts, Jafar's trusty bird Iago will be flying around aimlessly with Jafar's lamp. Dodge his attacks the best you can and focus on the bird. Attack Iago until he drops the lamp (which can take quite some time since the platforms will rise and drop as they please and Iago will be flying out of Sora's reach unless he's on one of the higher platforms) and Genie Jafar will dissolve. Genie Jafar's attacks are as follows:

Your reward will be the Genie Jafar enemy card. After the battle, Aladdin will keep his promise and use his third wish to free Genie. The now-freed Genie will then become a new summon for Sora, and Agrabah will come to a close.