When you get back to Castle Oblivion from Destiny Islands, Riku will be waiting for you once again. Fight him as you did last time (this being the third battle with Riku) and following the fight will be a long cutscene. Riku is about to kill Sora, but Naminé intervenes. She, somehow, makes Riku collapse, and Sora asks her what she did to him. Larxene then comes into the room to clear things up for Sora. She tells him that he wasn't fighting Riku all that time - he was actually fighting a replica of Riku, created by Vexen and the Organization itself. Naminé gave him fake memories, as she did to Sora, making the replica think that he actually was Riku. She goes on to tell him that doing what she did to Sora and the Riku replica is what she does best: she goes into people's hearts and rearranges their memories. She also gives you the sign that Axel is a good guy by saying he betrayed them. Sora finally realizes everything in his memory were lies created by Naminé.

Larxene is then about to attack Sora, but Naminé, surprisingly, jumps in the way. She tells Larxene that she won't let her hurt Sora, and Larxene responds by pushing her aside. Larxene then acts surprised at Sora's concern for Naminé, to which Sora responds that they may be fake memories, but they're his, and he's going to stay true to them. Larxene is about to attack Sora when Goofy runs to Sora's side and knocks her over, and Donald proceeds to heal Sora. You now have the Donald Card and Goofy Card back.

It's now time to fight Larxene for the second time, except this time, the battle will finish her off for good. She has three health bars, a new move, and overall puts up a tougher fight than her last. She won't be as hard as that fight with Riku you just had, however, so as long as you defeated Riku, you should be able to defeat her. After the battle, Goofy and Donald meet Naminé and congratulate Sora for finally reaching his goal. It's not long before the fact that this is actually Sora's and Naminé's first meeting comes to light, and the group moves on to the real Castle Oblivion to get their memories back.

When you reach Room 12, use a Moment's Reprieve Card for the next room. Strike the door in the next room and synthesize using one Magic Card, three Attack Cards, the Key of Beginnings, and enough cards to make up a total value of 99. What follows will be a cutscene. Axel is about to attack Marluxia, but Marluxia then uses Naminé as a shield. Axel tells him that won't stop him from killing him - he'll kill both Naminé and Marluxia for all he cares. Marluxia then calls Sora, who is notified that Axel is planning to hurt Naminé. Sora begins the attack on Axel, who calls him a puppet. Sora responds by saying that he's no puppet - he'll kill both Axel and Marluxia if he has to. The fight then begins. This can be an easy boss battle, depending on how you look at it. If you're a fan of Fire cards, this may be a tough battle for you. Attacking him with Fire and also attacking him while he's facing you will only serve to heal him. Go behind him and attack with Blizzard cards. These damage his health a lot. After the battle, Axel tells Sora that he isn't bad and saving him was worth it. Sora is confused as to what this means, but Axel disappears before Sora can get an explanation out of him.

You'll end up in Room 11 after the battle. Go back to the room which you used Moment's Reprieve for and strike the door, using a card with a value of 1 or more for synthesis. For Room 13, 14, and 15, either clear the rooms of Heartless or move on and continue to the next boss battle. You should be at the appropriate level for the coming battle by now, so battling more Heartless isn't really necessary. The next cutscene will have Sora meet Marluxia. Marluxia thanks Sora for getting rid of Axel and then tells Naminé to erase Sora's memories so he can become his puppet. Naminé refuses to do so, explaining that Sora forgave her even after what she did, and that she can never break his heart. She says she doesn't care what Marluxia does to her. No matter what, she'd never hurt Sora. Marluxia, unhappy with Naminé's response, is about to kill her when Sora intervenes. He tells Naminé to do it. As long as everyone else has their memories, he can piece together his. Marluxia then calls Sora a fool, saying he'll become a lifeless shell and nothing else if he lets her erase his memory. Another voice tells him to guess again. The Riku replica intervenes, knocking Marluxia back. He tells him he'll protect Naminé - even if the promise is a fake one, it's his promise. Marluxia then angrily attacks, and it's battle time. 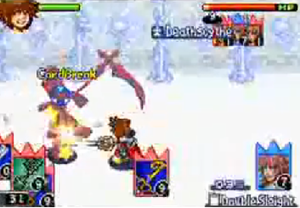 The best strategy to use against Marluxia is chaining Attack Card combos. He easily card breaks many sleights, and the Cloud Summon Card doesn't work well on him either, unlike every other boss you've faced in the past. To make matters worse, his health reaches a full fourth bar, making this battle not only frustrating but time-consuming. Magic Cards work okay on him, but it's best to stick with the Attack Cards. Keep slashing away and dodging at the right time and he'll be defeated eventually. Marluxia's attacks include:

After the battle, a cutscene will show that what you just battled wasn't actually Marluxia, it was just an image of him. Sora, Donald, and Goofy are about to leave the room to face the real Marluxia. Before they do so, Sora asks the Riku replica to keep Naminé safe, to which he agrees. It's now time for the final boss battle...

The next battle has Marluxia in two forms. The first form is, of course easier to deal with than the second form. Defeat all of the arms when battling the first form (which don't have too much health anyway) and form 2 will show up. He has four health bars just like the last battle you faced him in when he's in his second form. Be alert when your health is concerned: even when as little as one fourth of your health is gone, its best to heal should he land a deadly combo on you. And remember, while he's in his second form, aim for Marluxia and no one/nothing else. Attack right after you card break him and repeat. Eventually, the final boss will be defeated.

Now enjoy the ending cinema, for you have completed the game. Move on to Reverse Rebirth for an even greater challenge, or just skip to the sequel, Kingdom Hearts II.