Go back out the way you came and you'll be in Room 4. Synthesize using a card with a green border, a card with a value of 7 or more, and the Key of Guidance. The next room will have another cutscene. Maleficent is trying to make Belle call Beast over and fall for the trap. Sora, Donald, and Goofy intervene, and Beast arrives not long after. Belle tells him to leave because she doesn't want to see him so he won't get hurt by Maleficent. Beast, unfortunately, is hurt emotionally by her words but decides to stand his ground. After he explains why he looks the way he does, Maleficent announces that Beast's heart is purer than Belle's, and decides she's going to take his instead. Belle, however, jumps in front of Beast and takes the attack instead, transforming into a heart which enters Maleficent's scepter. Maleficent leaves and Sora, Donald, and Goofy once again offer to help Beast. You get the Key to Truth after the cutscene. Go back to Room 3. Head to the door to the east of the room, then head to the north door in this room, and then strike the left door in this room. Synthesize using an Attack Card, a Gimmick Card, and the Key to Truth. After the next cutscene in which Maleficent transforms into a dragon, it'll be boss battle time. 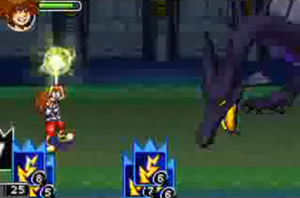 Maleficent won't be too hard of a boss as long as you're at the right level (which is probably at least 37). Use the usual attacks and combos and avoid her attacks and combos by card breaking or dodge rolling. Thunder, in this case, is a good card to use. It doesn't require getting close and can easily hit the large dragon. Her health reaches a third health bar, but this isn't too big a deal. It isn't as hard as it is time-consuming, which, even then, shouldn't take too much time. Maleficent's attacks include:

After the next cutscene in which Belle returns, leave Hollow Bastion by climbing the ladder in the next room.