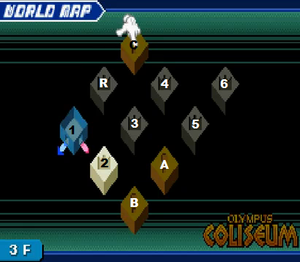 A labeled map of Olympus Coliseum

Upon your arrival, Donald will point out an announcement for the "Olympus Coliseum Survival Cup". It states that the undefeated Hercules will also be in on the competition, and every contender who wants to join will have to complete the preliminary course first. As expected, Sora convinces Donald and Goofy to join the competition with him and they run for the preliminary course. Hades inspects the announcement shortly after they leave and becomes infuriated with the way Hercules is portrayed as the "perfect hero". Cloud arrives shortly after, assuring him that, an exchange of the death of Hercules, Hades will return to him his lost memories.

The scene will switch back to the trio, who have just entered the Coliseum. Jump up the ledge and attack the Heartless to start a battle. There will be quite a few battles to start here, which makes Olympus Coliseum the perfect place to grind. Head through rooms 2, 3, 4, and 5 and you'll reach A. Talk to Phil, who directs you back to room 2. From there, open the way to B and you'll bump into Cloud. After a little talking, the three found out Cloud's true intentions - not to win the cup, but to get rid of Hercules - and start the battle. 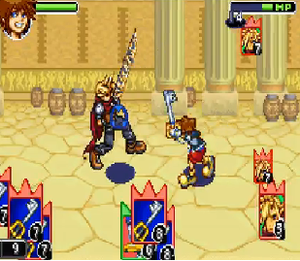 There really isn't much of a strategy to defeating Cloud. The best thing to do is use simple attack or magic cards (sleights won't be necessary here), dodge his combos (or break his stronger combos if you see them coming), and watch your health. Cloud isn't a very hard boss battle, but it's good to have cure cards to be on the safe side. Cloud's attacks include:

Cloud's moves aren't too hard to break or dodge, so there's no reason to worry over the battle. Do what Sora does best (slash away with the Keyblade!) and, after finishing the battle and gaining a Hi-Potion as a reward, head on over to room C. 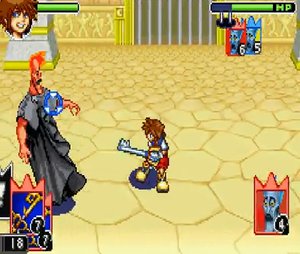 Hades gets fired up.

Hades will be a bit of a bigger challenge than Cloud, but still shouldn't be all too bad. When he's blue, he'll usually either be floating around or using a close-range fire attack which shouldn't be too hard to break. After he's taken enough of a beating in this form, Hades will change color and start using attacks that deal more damage, including both short and long-range attacks. Try to get behind him as often as you can when he's in this form, and eventually he'll switch back to his initial form. Hades' attacks are as follows:

After you defeat Hades, you'll get his card and all will end well with Cloud becoming a summon.