When Sora, Donald, and Goofy enter Wonderland, the first thing they see is a rabbit who claims that he's late. When he runs off, they follow him and encounter what looks like an outdoor courthouse. Alice is being sentenced to death for a crime that she didn't commit, and Sora has no choice but to intervene. After Sora claims that he stole the Queen's memory and not Alice, she orders the cards to seize them. A battle starts. The cards are a little harder to defeat than your typical Heartless, and also come in large numbers. After you defeat all of them, you'll get the Card Soldier enemy card.

After the battle, everyone will notice that Alice has disappeared. Just as the three of them are about to get bombarded by a large group of cards, Sora gives the order to run and they run into the forest, where Alice is waiting. After she thanks them, the Chesire Cat appears. When the conversation is over, you'll end up in the Bizarre Room. Not only will you run into the Queen, but also a large Heartless. This serves as your next boss battle. 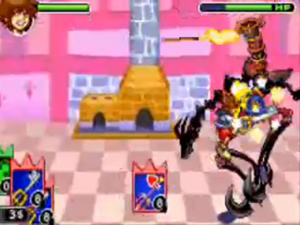 Aim for the center!

It'd be best to lock on for this boss, since the targeted area is the only place it will take any damage. Trying Stop or Gravity on it won't work - these attacks will have no effect on it. From the get-go, you'll be able to tell that the Trickmaster has one specialty, and that specialty is fire. It'll usually be throwing torches around, preparing its next attack. This is the moment to attack the Trickmaster. Below are the attacks used by the Trickmaster: