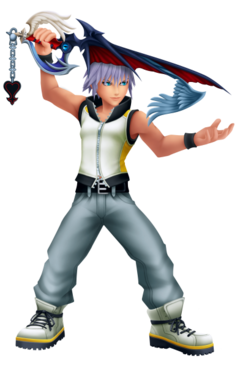 Kingdom Hearts 3D is the latest entry in the notoriously complicated Kingdom Hearts series. The six other games in the series are casually referred to throughout the game, making it potentially difficult for newcomers to understand what's going on.

The following is a brief summary of the Kingdom Hearts series thus far. Feel free to skip entries you've already played as you familiarize yourself with the games' stories. The events are presented in the universe's chronological order.

Long ago, there existed a single world full of light. Keyblade wielders fought over the light, also known as Kingdom Hearts. They sought to create the χ-blade in order to unlock it, but in the process, created the darkness that consumed their world. However, light lived on in the hearts of children, leading to fragments of the world reforming, albeit in a divided form. This event created a universe of small, usually separated, worlds. These worlds have radically different characteristics, and are the home to wide varieties of characters.

Many years later, a man named Master Xehanort was obsessed with Kingdom Hearts and the χ-blade. He abandoned his apprentice, Ventus, on the Destiny Islands, after failing to convince him to unleash the darkness in his heart. Instead, he extracted the darkness to create Vanitas, hoping to eventually use the two together to form the χ-blade. A few years later, a traumatized Ventus had forgotten about the event, and found a new home in the Land of Departure, a sort of home-world for various keyblade wielders. He met two other pupils there: Terra and Aqua, and the three trained under Master Eraqus in order to become Keyblade masters.

In a Mark of Mastery test, Aqua was found worthy of becoming a keyblade master. Terra, however, failed his test, isolating him. Meanwhile, mysterious new creatures called the Unversed appeared, which thrived on negativity. Terra went out among the worlds to discover their origins. Ventus ran away to be with his friend, and Aqua was sent to track Terra and bring Ventus home.

On his journey, Terra was corrupted by Xehanort, who convinced him that darkness was an important force. Meanwhile, Ventus met Mickey, another keyblade apprentice, and fought against Vanitas. The trio reunited in a world called Radiant Garden, but Terra, who felt betrayed, retreated further into Xehanort's clutches, while Ventus continued to run.

At some point, Terra went to the Destiny Islands and found a boy named Riku. He decided to give the power of the keyblade to the boy, who he saw as a kindred spirit. Later, Aqua visited the same world and met Riku's close friend, Sora.

Meanwhile, Ventus was confronted by Xehanort, who told him about his connection to the χ-blade. When Ventus went home to ask Master Eraqus about his past, the Master locked away his pupil's heart to prevent disaster. Terra arrived home just in time to witness this, and battled Eraqus to defend his friend. But after the fight, Xehanort struck down the weakened Eraqus.

Terra tried to bring Ventus to a safe place, the Destiny Islands. But Vanitas was already there, and revealed the truth about their common heritage and their destiny.

Terra, Aqua, and Ventus met up at the Keyblade Graveyard, the site of the original battle for Kingdom Hearts. After a violent struggle between the trio on one side and Xehanort and Vanitas, Xehanort possessed Terra's body. Ventus, rather than letting the χ-blade be formed, decided to sacrifice himself, taking out Vanitas in the process. Mickey showed up later on in the fight, and was able to save Aqua and a comatose Ventus. Seeking a place to keep Ventus safe, she chose to lock away the Land of Departure, which would eventually become "Castle Oblivion." What was left of Ventus's heart found its way into Sora, the boy from the Destiny Islands.

Aqua found and confronted Xehanort, who was now in possession of Terra's body. In order to usher Terra back into the realm of light, Aqua dove into the darkness, where she remained for years to come.

Sora, Riku, and Kairi of the Destiny Islands had been close friends for the past decade, most of their childhood. They wanted to explore the outside world, and built a raft to go exploring. On the day before they meant to leave though, Sora encountered a mysterious figure in a robe that told them the world was now connected. That night, a storm hit the islands, and the Heartless attacked and destroyed the islands. Sora received a keyblade, and was able to fend off the darkness, but was separated from his friends in the process.

Meanwhile, in Disney Castle, King Mickey had gone missing, and Donald and Goofy went on a quest to find him. Eventually, they met up with Sora in Traverse Town, a refuge for those whose worlds have been destroyed. Together, they decided to travel the worlds looking for Mickey, Riku, and Kairi.

Eventually, Sora found Riku, but it was too late. The latter was falling into the Darkness, lured by the evil Maleficent. Sora and Riku each went their own ways to find and saved Kairi, whose heart turned out to have been removed from her body during the events that destroyed the Destiny Islands.

In Hollow Bastion, Riku revealed that he was the keyblade's true chosen one, and took it from Sora to use in his and Maleficent's evil plans. However, by demonstrating his worth, Sora took the weapon back, and defeated Riku in combat with the help of Donald and Goofy.

It turned out that Maleficent was just a pawn in the plan of a character called Ansem, Seeker of Darkness, who had possessed Riku. He sought to collect the seven purest hearts of the worlds, belonging to Kairi and several other characters, in order to unlock Kingdom Hearts. Sora and friends managed to stop him in the nick of time, but Riku ande Mickey were trapped inside Kingdom Hearts's realm.

With Kairi safe, the trio went on a journey to find Mickey and Riku. Soon, their travels brought them to Castle Oblivion, a base for a group known as Organization XIII. The Organization used a girl called Namine to alter Sora's memories, with the goal of making the keyblade theirs. However, Sora ultimately defeated the Organization members, though at a great cost. In order to restore their memories, Sora, Donald, and Goofy had to enter a state of hibernation.

Meanwhile, Riku found himself in the lower portions of the same castle. While ascending, he constantly fought the darkness that remained within him, including the shadow of Ansem. With the help of Mickey, his occasional partner in his quest, he discovered a mysterious man called DiZ and Namine. After facing his inner darkness in a final battle, Riku worked with the two in order to restore Sora's memories.

In Kingdom Hearts mythology, Heartless are created by forcefully removing the heart of an entity and turning it into something sinister. Sometimes, when the spirit of the entity is particularly strong, it is reformed as a "Nobody," a sort of lingering spirit. The most powerful Nobodies kept their original appearances, and formed Organization XIII. The thirteenth member of the Organization, Roxas, joined roughly near the end of Kingdom Hearts. He was actually a Nobody created during a brief incident where Sora separated his heart from his body in order to save Kairi.

About a week after Roxas joined the Organization, a fourteenth member, Xion, also joined. However, unbeknownst to both Roxas and her, she was not a Nobody at all, but rather a partial Replica of Sora made from many of his memories. The two new members became friends with each other and Axel, one of the other more recent additions to the team. Together, they formed a close friendship, despite the sometimes heinous work they were forced to partake in. Their plan, to restore their hearts, involved making a new Kingdom Hearts, constructed from the hearts of the Heartless.

Eventually, Xion realized that both she and Roxas were created from Sora. Some of Sora's memories were trapped in Roxas, and Roxas would have be be killed in order to restore Sora. When the two clashed, Roxas came out on top, but not after making a promise to a dying Xion to defeat the Organization and stop their plans.

When Roxas went to defeat the Organization, he was stopped by Riku. The two fought in a climatic battle, neither side willing to give in. Eventually, Riku was forced to use his inner Darkness to come up top.

After a few days in DiZ's and Namine's possession, Roxas was incorporated into Sora, restoring the latter's memories.

Sora, Donald, and Goofy awoke with no recollection of the events of Chain of Memories. Soon after awakening, they met with Yen Sid, who explained the situation to them. After pursuing Organization members across several worlds, Sora learned that they had kidnapped Kairi.

Eventually, the trio met with King Mickey, who explained that the Ansem they had defeated was just the Heartless of the leader of the Organization, Xemnas. The original Ansem was a wise leader who studied the affairs of the heart, and whose research was misused by his assistants, who would eventually become the first few Organization members. Eventually, Ansem the Wise took the persona of DiZ, and fought the Darkness he had inadvertently helped to spread the best way he knew how.

With help from Axel, Sora, Donald, and Goofy reached The World That Never Was, the homeworld of the Organization. There, they eliminated most of the surviving members, rescued Kairi, and finally reunited with Riku. Ansem the Wise destroyed the artificial Kingdom Hearts at the cost of his own life, foiling Xemnas's plans. After Riku and Sora fought Xemnas in a final showdown, they returned to the Destiny Islands.