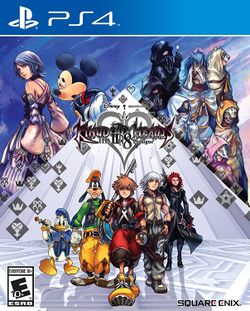 The collection features an HD remaster of Dream Drop Distance, which Nomura stated was essentially a full remake of the game, since the original utilized the two screens of the Nintendo 3DS. Minigames from the original 3DS version that utilized that console's dual touch screens were reworked into a card-based system, while enemies were made "less offensive than they originally were", a complaint from players in the original. Additionally, touchscreen-based commands were switched to a more traditional control scheme.

Kingdom Hearts 0.2: Birth by Sleep – A Fragmentary Passage is a new, short episode taking place after the events of the original Birth by Sleep, told from the perspective of Aqua. A Fragmentary Passage, which ties into Kingdom Hearts III and uses technology from III, is set immediately after Dream Drop Distance, when King Mickey reveals that he has a few secrets to confess, relating to Aqua and her time in the Realm of Darkness. The story then picks up immediately after the secret ending of Birth by Sleep Final Mix, and lasts around the length of one world from the series. The content features a world based on Cinderella, Snow White, and Sleeping Beauty in fragmented form. The "double flight" ability returns, which allows Aqua to leap higher and do a mid-air double jump, while also gaining a burst of speed mid-jump.

Aqua can also utilize powerful magic finishers, depending on the frequency with which she uses a certain type of magic. She also has access to the Spellweaver Command Style from Birth by Sleep, now referred to as a Style Change, though she cannot learn any others. It can be activated with the frequent use of physical attacks, rather than the magic attacks required for magic finishers.

Kingdom Hearts χ Back Cover, told through HD cinematics, tells a new tale of the Foretellers and reveal new parts of the series' history. Nomura revealed that Back Cover would utilize technology being developed for Kingdom Hearts III, and would be approximately one hour in length.