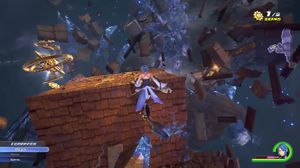 Find these gears at the end of paths in the area and combo them to restore the bridge.

You are now in Castle Town, where Cinderella's castle is located. Striking the streetlamps here will count toward Objective #23: Streetlamp Striker. After a scene ahead, you'll receive a story objective: strike the other four gears around the town in order to restore the bridge. A large chest on the path contains the Castle Town Area Map. The next battle ahead introduces Flutterings, flying Heartless that count toward Objective #2: Defeat the Flutterings upon defeat. Take note that this courtyard is a good spot to attempt Objective #14: Frozen Rail Ride; simply cast Blizzaga while facing the hill leading up to the save point and the fountain, and ride the rail that it produces to complete the objective.

Near the fountain, you will encounter your first Flame Core, whose defeat counts toward Objective #3: Defeat the Flame Cores. You can also strike the Flame Core with Blizzaga for Objective #16: Magic Advantage. Enter the menu after battle to equip some accessories on Aqua, obtained from the objectives completed so far. This will complete Objective #22: Trendsetter. Around the building to the right is a chest containing an Ether, as well as some more Flutterings. Backtrack and take a left turn to find a chest containing a Potion. Ascend the crumbling path past the chest, across rooftops and lampposts, to find a gear. Hit it with a combo to restore a part of the bridge. 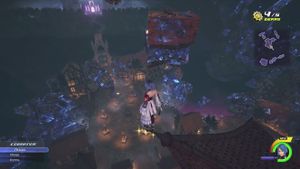 Use double flight and air slide to reach the floating building in the distance, where the "top of the town" can be reached for an objective.

Backtrack to the center of the area and ascend the northern path to the left. Up the stairs to the right is a path that leads underground. Before following it, take the steps to the left and jump across the rooftops to find a chest containing a Potion. Past this chest, follow the path upward to what appears to be a dead end. Look across to an overturned rooftop in the distance; while it may appear to be too far, Aqua can reach it with double flight, air slides, and even an air combo if necessary. Near this rooftop are some floating bricks, which Aqua can hop across to reach one final overturned building. Upon stepping onto it, the camera will give you a view of the castle, and Objective #24: Top of the Town will be checked off. After the detour, return to the chest and drop off onto the underground path to find the next gear. Across from the gear is a chest containing an Ether. Combo the gear and defeat the Heartless that spawn. You should now have two gears remaining. Backtrack and take the northern path to the right this time, where you should find a Flame Core and the fourth gear. From here, turn around and jump onto the rooftops to the left. Follow the crumbling path to the left to find the final gear.

Before crossing the newly-repaired bridge to the Castle of Dreams, there are a few more things to do here for the sake of completion. First, look at the sky in the direction of the Castle of Dreams. Eventually, a meteor shower should start, completing Objective #25: Starlit Wish. The remaining collectibles are available only on a New Game+ file: 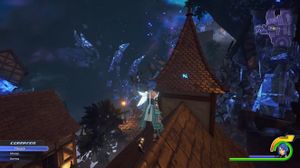 The Lingering Memory of Castle Town can be found on the roof of this building on a new game+ file.

Once everything has been collected, cross the bridge for a boss fight against the Demon Tower. This boss fight has a relatively simple pattern to it: attack it when the Shadows' eyes are in their default yellow state, and block/dodge its charges when their eyes turn red. Don't forget to use magic and Shotlock to attack from a distance. Defeating the Demon Tower concludes the Castle Town episode.

Go to top
← Walkthrough | Castle Town | The World Within →