This world is kicked off by a boss battle against the Demon Tower. This battle is similar to the battle against the Demon Tower in Castle Town, with the addition of a party member in the form of King Mickey. Use Barrier and counters when the Shadows go red, and go on the offensive when they're in their default state. The presence of Mickey allows Aqua to use a new Style Change called Wayfinder, randomly activated mid-battle. If you defeat the Demon Tower while Wayfinder's finisher is in effect on a New Game+ file, this clears Objective #50: Combined Strength. Additionally, simply using the Wayfinder Style Change will count toward Objective #35: Work Together with King Mickey, so make sure to use it at every opportunity.

Past the save point is the introduction of Earth Cores, Heartless that burrow into the ground and strike as they pop back up. Their defeat will count toward Objective #6: Defeat the Earth Cores. Afterward, open the large chest ahead for the Depths of Darkness Area Map. Past this is a segment of land in the center of the area that sticks up above the rest; underneath is a hidden tunnel where a chest containing a Mega-Ether can be found to the left. Back on higher ground, proceed forward to encounter some more Earth Cores. Along the path past this area is a chest by the right wall containing a Hi-Potion, and another further down to the left of the path containing a Mega-Ether. Past this chest, many Heartless spawn. This is a great opportunity to grind for some levels before the final boss, so take advantage by defeating them all.

Enter the cave past the area after defeating the Heartless, and open the chest to the left of the exit for an Elixir. On a New Game+ file, there's one more treasure to collect here, as well as a Lingering Memory:

After making all necessary preparations, walk toward the light for a scene that leads into the game's final boss. 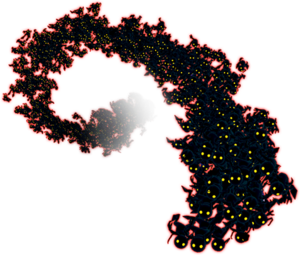 Into the Depths of Darkness
Complete KINGDOM HEARTS 0.2 Birth by Sleep - A fragmentary passage -.

Undefeated
Complete the story without having to Retry or Continue.

This boss initially has access to three attacks: a soaring strike, a Shadow trap, and an assault from underground. Each of these can be avoided with a well-timed Barrier, and a quick Counter Blast can then be used to damage the boss. Aqua can tell when the Demon Tide is about to attack by watching the eyes of the Shadows that comprise it: when the eyes glow red, it means the boss is about to strike. Aqua should avoid the Demon Tide in these instances and use a combination of physical attacks and magic to harm it in the interim. Whenever the Wayfinder Situation Command becomes available, Aqua can use it to immobilize the Demon Tide and quickly deplete its HP by teaming up with King Mickey.

The Demon Tide becomes much more aggressive in an attempt to protect its vulnerable core. Added to its arsenal is a new projectile attack that is best avoided with Cartwheel. It switches between this and a another attack, in which its tornado of Shadows glows red and rushes Aqua. During this attack it retreats every now and then, giving Aqua the ability to use Barrier again. If Aqua stands too close to the edge of the map, it might not retreat far enough. In this case the attack is continuous. While the tornado is blue-purple, it's safe to attack. When its health gets even lower, the Demon Tide warps away its core while its tornado remains. After this, invulnerable orbs made of Shadows will be launched from the ground at random. If this happens, Aqua should Cartwheel around as much as possible to dodge these. If she is hit, the orbs will launch her into the sky, where she is a risk of being hit again by other orbs. These can be avoided with Air Slide, although this becomes more difficult as Aqua falls towards the ground. At the end of the attack, the tornado increases in size and whirls around the entire arena, limiting Aqua's movements. When the Demon Tide is not using any of these attacks, Aqua should enter the tornado and bombard the Demon Tide with aerial combos until its HP is fully depleted.

Defeating the Demon Tide on a Critical New Game+ file is required to clear the game's final objective, Objective #51: Critical Conquest. Save your Shotlock for the Demon Tide's second phase of attack, as the invincibility window that it grants should come in handy during an otherwise deadly onslaught. Elixirs and Megalixirs are capable of restoring the Focus gauge, allowing for another strong Shotlock attack. This is one of the game's most difficult objectives, so don't be too bothered if it takes multiple tries. However, you may want to complete Objective #9: Test of Strength III, which requires you to raise Aqua to level 80, before attempting it. Simply run back and forth through the Depths of Darkness, defeating the numerous groups of Heartless that spawn to contribute to your experience count.

Once the Demon Tide has been defeated, you'll get a glimpse of the next game in the series, Kingdom Hearts III. Congratulations on completing your journey through darkness!

Go to top
← Forest of Thorns | Depths of Darkness | Objectives →