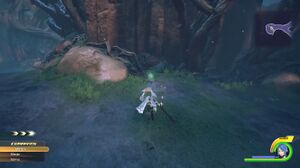 Examine the green flower ahead to begin Objective #34.

Strike at the thorns ahead to open a path to the first treasure chest, containing the Forest of Thorns Area Map. Glide along the rail to the other side of the chasm and dodge the thorny vines or dispel them with magic, as coming into contact with them will only deal damage to Aqua. Blasting them with magic will count toward Objective #33: Prickly Problems, for which you must destroy fifty. Fight off the Heartless that spawn in the subsequent clearing and take note of the rocky tower to the left of the area. Use Flowmotion to glide along the vine atop the rocky formation. Upon reaching the end of the vine, you should see a chest across the area. Use an air slide to reach it for a Mega-Potion. Back on the ground, proceed past some more thorny vines, down a path to the left to another clearing. Here you can find a little green flower which represents Fauna, one of the fairies in Sleeping Beauty. Examining it will count toward a hidden objective, for which Flora's and Merryweather's flowers must also be found.

Turn back and take the path to the right to see Terra and Ventus, who fade as Aqua approaches. Blast the thorny vines in the way with magic and glide along the vine across the ground for a scene, which leads into a boss battle with a familiar foe. Darkside's attacks are fairly simple; jump when it slowly reaches its arm down to the ground, as this will result in a shockwave. This movement leads to an attack in which it pulls a giant shadowy orb from the ground. It can be attacked as it collects the orb and as it slowly raises it up before separating it into a rain of small dark orbs. These orbs fall slowly, so they're fairly easy to dodge. This is your opportunity to attack. Target its arms or head to do damage to it, and defeat it for another scene. 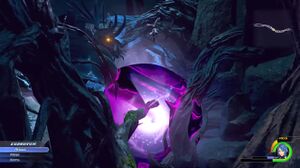 Use Doubleflight to jump high over the Darksides' attacks on the rail.

Follow the apparitions of Terra and Ventus deeper into the forest. The next Darksides that you see cannot be attacked, but will instead summon hordes of Shadows to fight in their place. Defeat them and continue forward; a Darkside will pop out of the vines to attack as Aqua proceeds down the path. Use Doubleflight to dodge the shockwave and proceed to the vine that Aqua can glide on. Along this vine will be numerous Darksides that attack in the same manner; as before, jump before they can attack to dodge. Dodging all attacks successfully on a New Game+ file will clear Objective #46: Slide Along the Ivy Rails. Defeat the Heartless upon landing and open the chest to the left of the area (behind some thorny vines) for an Ether. 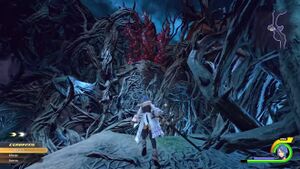 A treasure chest hides behind the thorns on this high platform; blast them with magic to uncover it.

Proceed forward until you come across a Darkside shooting projectiles. Take note that Aqua can use Barrier to block the projectiles and send them back to the giant Heartless. Defeat it to start working on a hidden objective that requires the defeat of three Darksides in the area. Clear the thorny vines in the path and take a few more steps before using Doubleflight to reach a high platform to the left. Use Doubleflight again to spot a platform along the opposite wall, blocked by thorny vines. Blast the vines with magic to reach the chest containing a Potion. Drop back down and continue along the path to encounter the second Darkside. 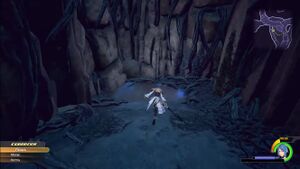 Examine the blue flower behind the second Darkside to continue Objective #34.

After defeating the second Darkside, look in the puddle of water behind it to find the blue flower representing Merryweather. Backtrack a bit after examining the flower and climb up the steps along the wall. Upon reaching the top, you should see a chest hiding behind some thorny vines across a gap. Blast the vines for the Ether inside the chest. Drop down and follow the other set of steps in the area toward apparitions of Ventus and Terra. Upon reaching the apparitions, turn to the right to see a chest along a far wall. Air Slide to it for a Hi-Potion, then Air Slide back. From the same spot that the apparitions were in, drop off to find a narrow path to the right. Defeat the Darkside along the end of this path; this should be the third, allowing you to complete Objective #32: Defeat the Darksides. Behind the Darkside is a chest containing a Hi-Potion. Return to the spot that the apparitions were in and continue forward. 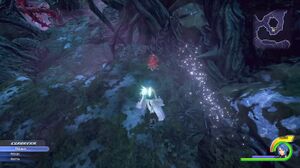 Near a drop that leads to a treasure chest is the final flower required for Objective #34.

Clear the path of vines as you move along it. Along the left of the area you should see a path that leads downward, where a chest containing a Potion sits. Back along the main path, take a right at the next fork to find a drop. Below is another chest containing a Potion. Jump back up and examine the red flower by the wall. This flower represents Flora, and should be the last flower required to clear Objective #34: Fairy Bouquet. Continue along this path to come across a small clearing where Heartless spawn. Defeat them and climb up the steps toward the pair of apparitions. Off a path to the right is a chest containing a Mega-Potion. Return to where the apparitions were located and continue upward for a scene.

From this point onward, you can attempt Objective #47: Keeper of the Orb on a New Game+ file. Any damage taken following the scene will result in failure of the Objective. Before you can actually begin the boss fight, you must reach the Darkside that holds the dark orb. This is complicated by smaller orbs that rain from the sky, creating pools of darkness that deal damage upon hitting the ground. Walk or Cartwheel around them and jump to dodge if they get too close. You can also use Air Slide to dodge any that come close while Aqua is in the air. 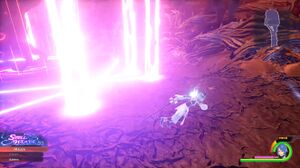 When the Darkside summons lasers from above, observe them from afar to give yourself space to dodge.

Upon reaching the Darkside, you can use the same strategy as before to avoid its attacks; jump when it moves its hand toward the ground to create a shockwave and use Barrier when it launches projectiles to deal damage back to it. It has a new attack in the form of lasers that it summons from the dark orb by raising its hands toward it. Watch the patterns on the ground to dodge the lasers, and use Shotlock if you feel you are in peril to grant Aqua some temporary invincibility and deal easy damage.

Real or Illusion?
Complete the Forest of Thorns episode.

Upon defeating the Darkside, approach the final apparitions of Terra and Ventus for a scene. This marks the end of the world, but there are still some treasures and a Lingering Memory to collect on a New Game+ file. Their locations are as follows: