Rooms of chests and columns[edit] 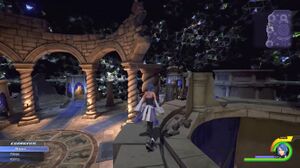 Jump on the pillar ahead to reach the chest on top of the archway.

Open the chest along the path ahead for The World Within Area Map. To start off the treasure hunt, there is a chest sitting atop the giant archway in the center of the area. To reach it, look for the broken pillar towards the back of the area, between two of the mirrors, that Aqua can jump onto. From here, she can jump onto a set of walls (either to the left or right) which can be used to reach a broken segment of the archway above. Inside this chest is a Mega-Potion. From the save point, enter the room past the nearest room to the right and examine the mirror to find yourself in a room filled with chests. In the far left corner of the room is a chest containing a Mega-Ether. Opening this chest will also allow you to complete Objective #28: Treasure Within. You can then exit this area by examining the mirror at the head of the room, returning Aqua to the hub of the world.

Facing the center of the area, find the mirror to the right of the one entered previously (columns should be visible inside the mirror). Upon entering, turn right and begin to walk down the row of columns. After passing by a few columns, turn around and look to the left to find a column with some glowing bricks on its side. Attack it to create a gap in the column, which Aqua can examine to turn the perspective upside down. This gives her access to the chest that sits by the column, which contains a Potion. Walk past the chest and look to the left to find another column that can be attacked. Examining the gap after attacking this column will return the perspective to its upright position. From here, turn around and look toward the left as you go. You should be able to spot another glowing column on one side of the mirror, and an unreachable treasure chest on the other. Repeat the process of attacking the column and open the chest for a Hi-Potion. Finally, enter the upside down mirror to exit the area. 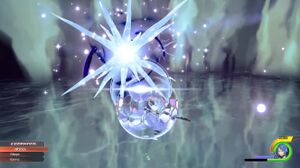 After a scene will be Aqua's first battle with her phantom self. Phantom Aqua has a number of impressive attacks at her disposal, but the real Aqua has the ability to defend herself using her 360° Barrier block, her quick Cartwheel dodge, and her Curaga recovery spell. Barrier especially should come in handy here; when Phantom Aqua launches giant icy spikes toward Aqua, there is enough time between the approach of each for Aqua to block them with Barrier. With practice, you should be able to perfect the timing of Barrier so that Aqua takes no damage from this attack. Until then, use Curaga for recovery.

When Phantom Aqua wanders around the area, not bothering to attack, this is your opportunity to go on the offense, though you have to be quick about it; oftentimes, Phantom Aqua will teleport away as soon as you attempt to land an attack. If you are quick enough, land a combo so that Aqua hits her finisher, then back away, as continuing the assault will only open you to an attack. Phantom Aqua will return to her aggressive attack pattern afterward, launching icy spikes toward Aqua with more speed; block them with Barrier to survive, and Phantom Aqua will go back to wandering around the area. Repeat the combo/dodge/block pattern until she has been defeated, though this isn't the last you'll be seeing of her. 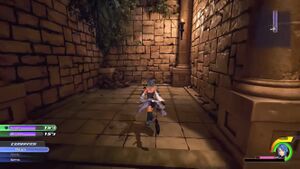 Turn back at the entrance after ascending the stairs a couple of times to find a chest, and then do the same after another trip up the stairs to find the exit.

Proceed to the next mirror (to the right facing the center of the area) after the short scene. Inside, you should see a set of stairs. This mirror seems tricky to escape on the surface, but is actually fairly simple. Start by walking up the set of stairs and examining the mirror at the top. This will transport Aqua in front of another set of stairs. Walk up the stairs here to encounter some Water Core Heartless, best dealt with using magic. Defeating these will count toward Objective #5: Defeat the Water Cores. Examine the mirror at the top of the stairs yet again afterward. Before proceeding up the stairs, turn to the left to find a chest containing a Hi-Potion. Proceed to the mirror at the top of the stairs one last time to be transported in front of yet another set of stairs. Instead of going up, simply turn around to find a mirror. This will take you to another boss fight.

Phantom Aqua will be much more aggressive in this battle than the last, starting off by running toward Aqua in order to initiate a flurry of strikes. Block as soon as she approaches for an opportunity to perform a counter blast, then hit her with a combo. As before, charge toward her when she starts to wander around the area, as this is a good opportunity for another combo. Don't forget to use magic if the distance between Aqua and her phantom is too great for a strike. Aside from Phantom Aqua's new aggressive attack, this battle should be no different from the last, so consider it practice before your final encounter with her.

Enter a mirror to the top-right of the area; inside you should see what looks like a mine, covered in gemstones. Here, you must find seven gems (representing the seven dwarfs) to clear a hidden objective. Start by walking down the path toward the first mirror. Near this mirror is a rock where the first gem can be examined. Examine the mirror afterward and the floating platform inside will be transported to the empty space behind Aqua, allowing her to proceed to the next mirror. In a crate to the left of the mirror, hidden behind some barrels, is the second gem. Examine the mirror when the floating platform inside descends to its lowest point in order to gain access to the third gem, then return to the mirror and wait for the platform to ascend a bit so that Aqua can use it to reach the next platform. 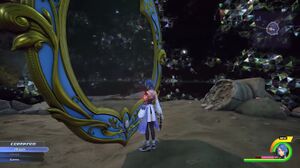 Wait until the path in the mirror lines up with the silver gem floating off to the side to reach it.

Along the path to the third mirror, destroy some crates to the left to reveal the fourth gem underneath. Examine the mirror when the gems on the two floating platforms inside line up to form a wayfinder, clearing Objective #30: Connected. You can then use them to reach the next area, where Water Core Heartless spawn. Upon landing, look to the left to find some barrels; underneath them is the fifth gem. Sitting in plain sight on some boulders to the right of this area is the sixth gem. After defeating the Heartless, slide down the path ahead and examine the backside of the mirror; examine it again when the floating path lines up with the seventh and final gem floating off to the side. Examining this last gem after examining all others will clear Objective #29: Gem Gatherer. Notice the high platform floating off the other side; examine the mirror and wait until the path lines up with it to reach it. On this platform is a chest containing a Megalixir. Finally, line up the path with the final platform ahead to reach a chest containing a Hi-Potion and the mirror that leads to the exit.

Phantom Aqua now has the ability to use Spellbinder. Use Barrier to block her attacks and give yourself an ability to combo her. If you yourself happen to enter Spellbinder, keep in mind that using its finish in any battle against Phantom Aqua will clear Objective #31: Queen of the Rink. Phantom Aqua will use her own variation of this finish by surrounding Aqua with clones and then closing in on her as they spin; you can either avoid taking damage from this by using Barrier just as they reach Aqua or by dodging through the formation once they get close enough. Avoiding the attack in either way should give you an opportunity to counter one of the Phantom Aquas with a combo. Remember that you also have Shotlock and magic at your disposal (though depending on the difficulty, MP may be best saved for Curaga). Additionally, defeating Phantom Aqua in this fight without taking damage will clear Objective #41: Flawless Victory, though this is best attempted on lower difficulties; use Barrier frequently, and if you do happen to take damage, just let Phantom Aqua defeat you and retry.

After ending up back in the hub, walk across the center of the area and head toward the mirror to the northeast. Inside should be a room similar to the room of chests. Defeat the Heartless that spawn and then exit to return to the hub. Now head to the mirror past the save point. Inside should be candles. Attack them all to darken the room, after which Heartless will spawn. Defeat them to clear Objective #27: Mystery Within. Finally, enter the mirror to the left of the center of the room and defeat the Heartless to clear Objective #26: Heartless That Dwell and gain access to the mirror past the save point, which will take Aqua to the next world.

When playing on a New Game+ file, there are a few more things to pick up here:

Go to top
← Castle Town | The World Within | Forest of Thorns →