Re:Chain of Memories shares many similarities with the original Chain of Memories. However, it has many differences. These differences include extra cards, new boss battles, major cosmetic changes with graphics and cutscenes to match those of the PS2 games in the series, and even a few battle changes. These changes are described below. For gameplay basics, see here. 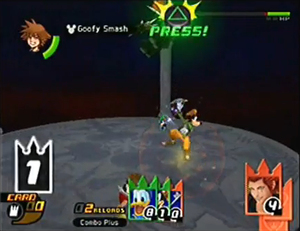 An example of a reaction command in Re:Chain of Memories.

control in the original Chain of Memories was replaced by

, which can also be found in Kingdom Hearts II. A reaction command is usually a special attack you can perform given in the form of a "press

" on the screen which will allow you to continue your attack on the Heartless and extend your combos. It's similar to a QTE, except the button that always must be used for these commands are

before the reaction shows up, the sleight will break and there won't be a combo to continue on. Reaction commands exist to work to your advantage in battle, so whenever you see the command, remember to time it right and the enemy will be harmed. 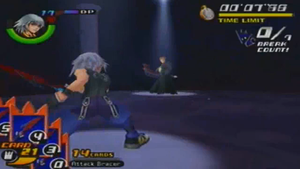 Riku engages in a card duel with Lexaeus.

Additionally, a new duel system has been added to Reverse Rebirth that seems to be based on the popular card game, War. Once Riku and his opponent engage in a duel, the cards battle each other. Which ever card has the higher value knocks the other card out. Which ever decks beats out the other and has the most cards left wins. The victor gets to attack the loser and then the battle continues on. Depending on how large your card values are, this can be either an advantage or a disadvantage. Keep cards with high values in your deck if you want to gain the upper hand.