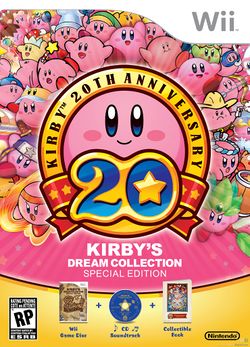 Kirby's Dream Collection: Special Edition (星のカービィ_20周年スペシャルコレクション, Hoshi no Kirby 20 Shūnen Special Collection?, Kirby Special Collection 20th Anniversary) is a collection of Kirby games for the Wii. It was released in Japan on July 11, 2012 and will be released on September 16, 2012 in North America. The "Special Edition" refers to the fact that the pink box artwork is for a box set that includes a Wii game box (which includes six Kirby games that have additional, new "Challenge Stages" like the ones in Kirby's Return to Dream Land), a 45-minute soundtrack CD, and a special 48 page booklet that includes lore about Kirby. Some of the games now include multiplayer modes.