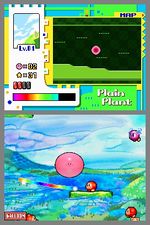 The Balloon ability in action.

The first area of Plant Plain is a basic area that has few obstacles. The first medal can be found about halfway through the area, directly in Kirby's path. The top left corner has a 1-Up and the balloon ability; to access it, draw ink ramps until high enough to reach it.

The second area is another simple area that has a few more enemies than the previous one. The beam ability can be obtained from a Waddle Doo to help defeat them. The second medal is trapped between barriers that can be destroyed by touching the bomb block.

In the third area, defeat a Wheelie to get the wheel ability. The wheel ability can defeat all enemies in the way and destroy any blocks in the path. Before going through the exit, the third medal lies on a platform above to the left. The trick is to get over the door without going through it. A cannon can be found on the right side of the door, so if your ink ramp misses and lands you there, you'll be shot to the upper ledge. Simply tap the 3 star blocks to smash them and access the medal 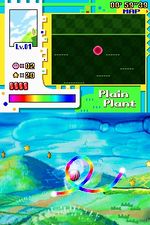 The time trial uses the first area. To get under 0:15:00, keep dashing!. The block lying in air should be destroyed so Kirby will not get blocked by it.

The line trial uses the third area. This trial can be completed without using any ink. Get the wheel ability and use it to go through the entire course.