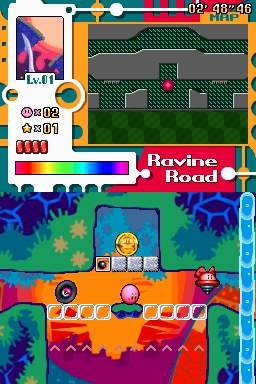 Kirby rests below a medal in Ravine Road.

Ravine Road is set in a series of cliffs. Falling to death is actually not possible for most of the areas. Blasts of wind will keep you afloat. The area maintains the relatively easy nature of the other areas of Reddy Land. The number of stars for 1 Ups, and actual 1-Ups pale in comparison to Plant Plain.

Get the medal
From the entrance, you'll see a small army of Waddle Dees, get close to them and tap Kirby to perform a dash attack. If the dash is started too far away, the power will wear off before reaching the last enemy and will damage Kirby. Continue rolling and tap any enemies that are getting close. Don't worry about slaying them, as little use comes from it. You'll come to a dash pad that will automatically thrust Kirby through several Bouncies and a Waddle Dee lining up a hill. After the crest of the hill, begin traveling as directly up as possible, stay close to the left wall. A nook in the wall will be evident and the medal can be obtained easily.

Get some stars
From here, keep drawing rails to keep Kirby afloat up high. All of the Point Stars in the area are up here, and upon collecting 100, a 1-Up will be rewarded. The path of the stars will lead to a canon that fires through even more stars, and directly into the exit door.

Ignore the stars
Unless you are in need of point stars, ignore them and head directly upwards. A nook similar to the one in Area 1, housing a medal is above the entrance. This time, a Bang-Bang is about to fire from it. Be alert, as he could be flying or on the wall. Get the Missile ability from it by either hitting it with a dash attack, or stunning it and coming into contact with it. Fire directly to the right with no worries. The enemies below will be completely bypassed. If you are too low and do seem to be too close, simply tap them before striking them. A wall of blocks that can only be broken while in missile form, houses the area's medal. The next wall will exit directly above the goal door. Tap Kirby to return to ball form and drop to the door.

Free Wheelie
Drop down from the entrapping ledges by tapping on the bomb blocks. The clear squares will collapse on contact. At the final ledge, tap the Wheelie before tapping the bomb block. The wheel ability will allow Kirby to race through the stage with no regards for the enemies. A set of trampolines will start bouncing Kirby around on contact, but nothing to worry about. The only concern in this stage is that there is no in-rush of air beneath the collapsible blocks. Falling will result in the loss of a life. (Backtracking is more difficult on account of that.) After hitting the checkpoint, draw a line to reverse Kirby's direction. Follow the lower route slowly as to not miss the medal. Tap the bomb block midway through and the medal will drop to the ground. Continue rolling to the right. At the end of the ledge, draw a ramp to send Kirby upwards to the goal door, but watch out for the Bronto Burts and Waddle Dee.

The area used will be Area 3. The shortest time for all three medals, 33 seconds is very lenient for this stage if the Wheelie ability is used.

To begin, tap both bomb blocks right away. Limit Kirby's travel on the collapsible blocks to get down faster. Opt to tap the bomb block and Wheelie beneath the final ledge. As quickly as possible, draw a C-shaped line to get to the higher ground. Activate the wheel ability by tapping Kirby as soon as he's between the gap in the wall. A series of trampolines will bounce Kirby to higher ledges, simply allow him to go and keep tapping Kirby to reactivate wheel mode. Once on the final ledge, wheel all the way through and draw a slight ramp near the end and Kirby should be launched directly into the goal door.

The area for Line Trial will be Area 2. The bursts of air from below will keep Kirby afloat. Simply allow him to drift on his own. The way he bobs up and down may seem as tho he's about to fall through and lose the game; but it's a trick, don't draw any lines. The only line needed will be at the end of the stage. The wall to reach the door will be too high for even the highest crest of Kirby's erratic floating. Start a line slightly ahead and beneath where he will be, and lead it to just over the edge of the wall. With 150ml to spare from the 400ml capacity, it's rather easy to get all three medals at once.