Kirby 64: The Crystal Shards, like most Kirby games, is a pretty simple game to play. The game uses minimal controls, but does utilize the Control Pad over the Control Stick, which is uncommon for Nintendo 64 titles. 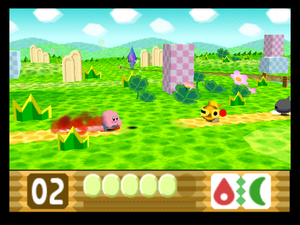 The objective of the game is to collect as many Crystal Shards as possible, there are 72 total in the game. The more the player collects, the better the ending of the game will be. Each world has three or four stages, followed by a boss fight level. In each stage, there are three Crystal Shards to find, and the bosses at the end of the worlds will give up a Crystal Shard upon being defeated.

This is what is displayed on the HUD during gameplay:

Kirby has six points of health that depletes when he takes damage. If he takes too much damage, falls in a pit, or other instant-death scenarios, Kirby will lose a life. Kirby can heal damage by finding Food items scattered through levels, and can gain a life by finding 1-Ups in levels, collecting the 1-Up in the end-of-level minigame, or by collecting enough Point Stars. 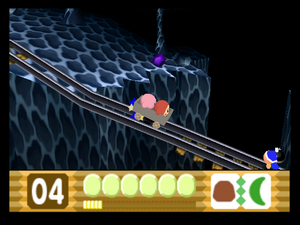