This stage takes place in the high treetops and has six sections.

Crystal Shard
When you meet Waddle Dee who carts you on the cable-system, you can jump off the platform when you see a vertical line of stars. When you grab the shard, inflate and try to reach the platform again before you have trouble floating in the air.

After your free ride from Waddle Dee, you enter into a cavern. Once you're inside, there are 3 Glunks shooting down and one line of yellow stars. Proceed to jump down. When you jump down to the hole, right before the hole on each side is an item. On the left is a maximum tomato and on the right is a 1-up. These can come in handy if you're having trouble staying alive. Once you grab those, continue down into the hole. You drop into another room with a door all the way to the right behind the giant Bouncy.

Crystal Shard
A reward for defeating the miniboss, a giant Bouncy. 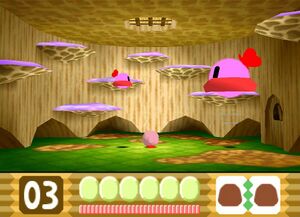 Unlike the last mini-boss the regular sized bouncys/minions will attack you. It is to your convenience that you obtain some type of ability before entering. This is not only to defeat the mini boss but also to defeat what is directly after. If you have no ability, you are still able to defeat the mini boss. After each minion spawn, just inhale the minion and spit it out at the mini-boss, Bouncy.

Crystal Shard
A reward for defeating the possessed boss, Adeleine. 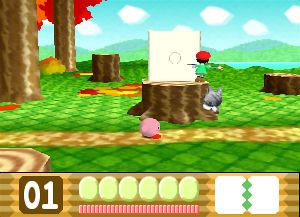 The first time that this stage is played, you must fight Adeleine.

Adeleine, being an artist, doesn't attack directly, and instead lets her drawings attack on her behalf. His initial drawings are an N-Z, a Bronto Burt, a Mariel, and two other enemies. All of them may be defeated with the basic inhalation.

Next is a blue dragon that drops ice blocks and throws them at you. Inhale them, and launch them back. Three hits destroys this drawing.

Finally, a drawing of dark matter. It makes two attacks where it swoops at you, which need to be jumped. Next, it drops two smaller verisons of itself, which need to be inhaled and launched at the main drawing. Again, the drawing is destroyed after three hits.