There are a total of 22 vehicles in Kirby Air Ride, each of them having their own unique traits. They are listed below as follows. 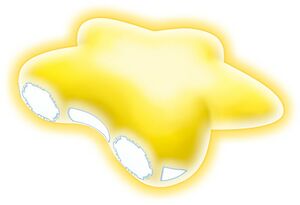 Most balanced Air Ride machine in all aspects.

Has adequate speed stats, but terrible traction. It slides a lot, hence the name. However if you learn to master it, it can be the best star in the game. To use it correctly, tap "A" as fast as you can when you want to turn. You won't slow down much, but will execute the turn more smoothly than otherwise.

Handles poorly and is not very fast, but shoots like a rocket when fully charged.

One of the best Air Ride machines for speed. It is good in that area, but it cannot steer very well. Better for drag races, where turning is seldom required. Although this machine has a high top speed, its acceleration is slow.

It is fast (Good Speed and Boost), but its handling is sub-par. The Turbo Star cannot glide, and it can only charge when the player turns while doing so.

It is slow and handles poorly on the ground, but glides well for long distances. However, its high jump scores were unimpressive.

Uses Boost as fuel, requiring the player to charge when the boost meter is empty. Has an incredible top speed for its girth, and has high HP and Defense stats. Because of its slow acceleration and constant thirst of boost, it is better suited for deathmatches than races.

It also has a weird glitch that can be easily exploited. Go off any ledge at moderate-high speed and then start pressing

really fast to see what happens.

Accelerates to its top speed almost immediately, but virtually cannot turn, requiring the player to stop and pivot to change direction. It handles fluidly while gliding. It is better suited for drag racing, where turning is not required. However on tracks where there is a halfpipe, it will sometimes automatically match the turns inside the pipe.

Cannot charge, but has great control and is good in other areas.

Has good Speed stats, but can be difficult to steer.

Has great handling and charges quickly, but has poor Top Speed. The Wheelie Scooter jumps very high, making it a good choice for High Jump contests.

City Trial only. One of the legendary machines. It can be used in City Trial when the player has assembled it by finding its three pieces. Hydra has the highest Offense in the game (Which basically means it can blow up stuff real easy). Like the Bulk Star, it uses Boost as fuel. It is also the fastest vehicle in the game, with a top speed of 150 mph. Hydra can be used in City Trial Free Run when the player has filled in the "Hydra Parts X, Y, and Z" boxes in the City Trial checklist.

City Trial Free Run only. A prototype Warpstar with uprgraded gliding capabilities. It is the second-best glider in the game, bested by Dragoon. It is no different than the normal Warpstar in other areas.

An alternate character who is generally a cross between Kirby's Sword and Wing ablilities. He cannot charge, but is fast, can glide well, and can automatically attack enemies at close range. He can be used in the Air Ride and City Trial Free-Run modes.

Another alternate character who rides what seems to be a giant Wheelie Bike custom built to fit him. Like Meta Knight, he can attack enemies automatically at close range with his mallet. He is not very fast, but has high HP and Offense. He can be used in the Air Ride and City Trial Free-Run modes.

Top Ride only. A red-colored star. Move the Control Stick in the direction desired to go that way.

Top Ride only. A blue-colored star. Move the Control Stick left and right to turn.