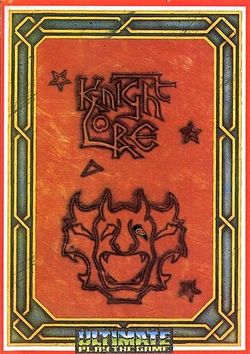 Knight Lore is a computer game developed and released by Ultimate Play The Game in 1984. The game is the third in the Sabreman series, following on from his adventures in Sabre Wulf and Underwurlde. Unlike the earlier games in the series it used Ultimate's filmation engine to achieve a 3D look using isometric projection. In the game Sabreman has to find the ingredients for a magic potion. The game was written by Tim and Chris Stamper, the brothers responsible for the later creation of Rare.

Knight Lore was regarded as a revolutionary title and was the first game in the "isometric adventure" genre, by displaying a detailed 3D world using isometric perspective. It was extensively copied by other publishers, and was described as being the second most cloned piece of software after WordStar. Knight Lore received an overwhelmingly positive reception from the gaming press at the time of time of its release. The game's reputation survives intact to this day and it still receives acclaim as one of the most important and advanced titles of its era.

Although Ultimate Play the Game were primarily associated with European software publication, Knight Lore did reach Japanese players in the form of a conversion for the Famicom Disk System. A subtitle was added, Mashiro no Ookamiotoko or "Evil Castle of the Werewolf". It was published by Jaleco, and released on December 19, 1986. It contains more than just 8 items, and uses an entirely different map system, made out of multiple stages.

My journey's end is near; as the last few ebbs of daylight dance fleetingly in the cooling twilight, and then suddenly dart off to chase the red sinking sun.

Behind me I feel night's dark icy fingers slither up long looming shadows, hiding behind large mounds and boulders, watching my every move... silently waiting... For days I have journeyed from the realms of the junglewulf to "KNIGHT LORE" castle to seek the old dying wizard and ask for his help to free me from this deathly curse... For countless nights I have slept chained to trees to keep my deathly curse at bay, but now I am here...

My footsteps echo around the damp mossy walls of the large chamber, as I enter through the open main gateway, colossal doors judder open in an untouched groaning symphony, beckoning me forward on my quest.

I sense the old wizard's gaze playing upon me, encapsulated within the labyrinth of traps and tests, to keep out all but the most persistent of unwanted guests who seek an audience with the great wizard MELKHIOR.

Suddenly a cool blue mist starts to ebb forth from the cracks in the ancient stone-work. As it does so it begins to take form and become a powerful swimming swirling vortex of energy. Over all the noise can be heard the chanting and singing of long forgotten tunes, all sung in a blur of forgetfulness.

THE WIZARD'S OLDER NOW THAN ALL
HIS HELP YOU SEEK WITHIN THIS WALL
FOR FORTY DAYS YOUR QUEST MAY LAST
LOCATE THE POTION, MAKE IT FAST
THIS HIDEOUS SPELL UPON YOUR SOUL
TO LOSE ITS HOLD MUST BE YOUR GOAL
BEWARE, THE TRAPS FROM HERE BEGIN
THE CAULDRON TELLS WHAT MUST GO IN
TO BREAK THE CURSE AND MAKE THE SPELL


TO SAVE YOURSELF AND MAKE YOU WELL.

The mist suddenly ceases its action and dissipates as quickly as it came.

I drop to the floor and with full knowledge of the old wizard I begin my quest. Dimly lit torches light the massive stone walls, their tired flickering flames never seeming to penetrate the inky darkness for more than a few feet... crystalline Merkyls, hideous Hobgoblins, stand frozen on huge monoliths, glittering in the cool trembling moonlight.

Encapsulated by the old wizard long ago, they await their fate in an un-ending task of defence, silent and stony. This is to be their last everlasting fate as guardians of KNIGHT LORE castle, until the ultimate death of the old sorcerer... The moon has risen quickly and in the fullness of its cool blue light, I become a Werewulf...

My fate is now all too clear, I have but forty days and forty nights to find the old wizard and seek his help and magical instruction, before my tormented soul becomes forever a werewulf.

Taking the role of Sabreman, the player must find the wizard Melkhior, then scour Knight Lore castle to retrieve the objects successively requested by his cauldron. Once collected, the objects must be returned to Melkhior, and dropped into the waiting cauldron. Successfully fulfilling all 14 of the cauldron's requests within a forty day period frees Sabreman from the curse of lycanthropy cast upon him by the Wulf encountered in Sabre Wulf.

The curse itself plays an important role in gameplay. While beginning the game as Sabreman, the player is periodically transformed into a werewulf as day turns into night (a sun / moon dial is shown in the bottom right corner of the screen). At the point of transformation (either to, or from, the werewulf), Sabreman experiences a short seizure, and is vulnerable to enemies or hazards. Certain enemies (including Melkhior's cauldron itself) will attack Sabreman when a werewulf, making the timing of certain actions crucial.

In what was revolutionary for its time, the castle is presented as a series of isometric, flip-screen rooms. Negotiating many of these rooms requires good platform skills, especially since some platforms disappear or move when stepped on. In some rooms, objects such as tables or treasure chests (or even the objects collected for the cauldron), need to be used to reach carefully positioned goals.

Aside from platform-hopping, Sabreman must avoid a series of enemies and hazards. Static beds of spikes and falling spiked metal balls are among the simplest hazards. Malevolent portcullis gates guard many thoroughfares, and are often accompanied by slow-moving, but lethal, guards. Faster moving enemies, such as ghosts and Melkhior's cauldron spirit, provide more dangerous company. 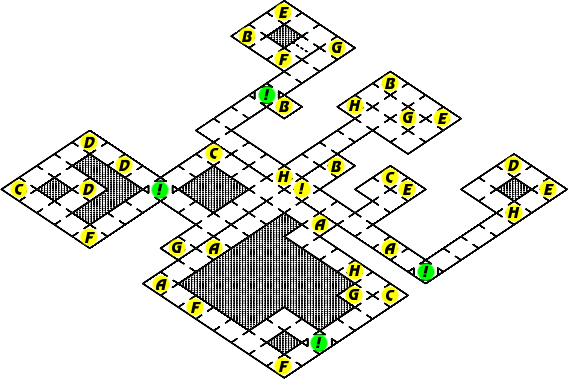 At the start each game, the items at locations A through H are assigned a different item. However, once you know where one item can be found, you can use the following table to determine the location of the rest. The numbers 1 through 8 are the different combinations of item locations. Of the eight item locations, only seven are items. The eighth location will have an extra life. So for example, if you happen to locate a grail at an A location, you will always be able to collect an extra life at a B location.

The cauldron always requests items in the same order. However, the starting point within the order is always random. For example, the first item that the cauldron requests may be a bottle. After the bottle, it may request a crystal ball, or a diamond. If the second request is a crystal ball, the third request will be the grail.