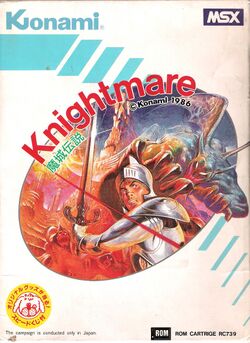 Knightmare, known as Majou Densetsu (魔城伝説, Majō Densetsu?, lit. "Demon Castle Legend" or "Legend of the Devil Castle") in Japan, is a 1986 vertically scrolling shooter video game developed and published by Konami for the MSX home computer. It was included in compilations for the MSX, PlayStation and Sega Saturn, followed by a port for mobile phones, and digital re-releases for the Virtual Console and Microsoft Windows. It is the first entry in the Knightmare trilogy. The game stars Popolon, a warrior who embarks on a quest to rescue the princess Aphrodite from the evil priest Hudnos. The player must fight waves of enemies while avoiding collision with their projectiles and obstacles along the way, and facing against bosses.

Knightmare was created by the MSX division at Konami under management of Shigeru Fukutake. The character of Popolon was conceived by a staffer who later became the project's lead designer and writer, as the process of making original titles for the platform revolved around the person who came up with the characters. Development proceeded with a team of four or five members, lasting somewhere between four to six months. The music was scored by Miki Higashino, best known for her work in the Gradius and Suikoden series, and Yoshinori Sasaki. The game proved popular among Japanese players, garnering generally positive reception from critics and retrospective commentarists. It was followed by The Maze of Galious and Shalom: Knightmare III (1987), while Popolon and Aphrodite would later make appearances outside of the trilogy in other Konami titles. In the years since, fans have experimented with remaking and porting the title unofficially to other platforms.

Knightmare is a vertical-scrolling shoot 'em up game starring Popolon, a warrior who embarks on a quest to rescue the princess Aphrodite from the evil priest Hudnos. The player controls Popolon through eight increasingly difficult stages across a Greek-esque fantasy setting, populated with an assortment of enemies and obstacles, over a constantly scrolling background that never stops moving until a boss is reached, which must be fought in order to progress further. The player must also avoid or take out enemy formations to gain bonus points, and reveal hidden bridges to cross rivers by shooting at it.

Popolon is equipped with a bow and arrows as the main weapon, which can be upgraded or changed by collecting a flashing weapon crystal. Picking up a new weapon grants its initial state and can be upgraded by picking the same weapon twice in a row. Popolon can also obtain temporary power-ups via power crystals branded with a "P" icon that initially appears colored black. These can be cycled through other weapons and power-ups by firing at them, ranging from boomerangs, three-way shots, swords, speed increasers, temporary invincibility and a shield to withstand enemy projectiles. If grabbed in their initial state, these crystals grant extra bonus points instead.

Scattered on the playfield are question mark blocks containing chess-themed magic jewels that can aid or hinder the player by shooting a block to release the jewel. While many of the blocks are visible onscreen, others are hidden and must be unveiled by shooting at the block until the jewel is released. The player can also uncover secret exits within certain stages and warp into the next stage. Getting hit by an enemy or blocked by an obstacle and scrolled offscreen will result in losing a live stock, as well as a penalty of decreasing Popolon's overall firepower to his original state. The player can obtain more lives by earning 100.000 points each time or collecting a yellow magic jewel, but the game is over once all lives are lost.